Theatre Breaks for Charlie and the Chocolate Factory

Charlie and the Chocolate Factory Theatre Breaks for the musical adaptation of Roald Dahl’s most famous creation – the must see family show – are no longer available. 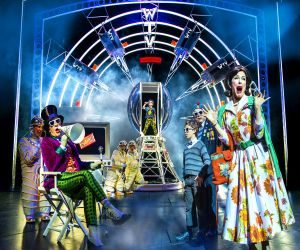 Roald Dahl’s Charlie and the Chocolate Factory, ‘Theatre Show of the Year’ winner at the London Lifestyle Awards 2015, was brought to life in a brand new West End musical directed by Academy Award® winner Sam Mendes.

Dahl’s 1964 book tells of a young boy from a poor family who wins the chance to explore a magical sweet factory after discovering a golden ticket inside one of Willy Wonka’s chocolate bars.

A chocolate garden, an army of squirrels and the curiously peculiar Oompa-Loompas in this gigantic Olivier Award-winning musical that is choc-full of fantastical treats to dazzle your senses.

Sam Mendes, the director, is probably best known for mega hit films such as American Beauty and Skyfall.  But on the stage he is equally accomplished having directed productions as diverse as Uncle Vanya, Twelfth Night, Cabaret, Oliver! and Gypsy.

Charlie and the Chocolate Factory and Hotel Accommodation

Charlie and the Chocolate Factory Theatre Breaks were the great event for the whole family to see this Christmas. A family theatre break including one of our nearby hotels could be the golden ticket this year.

From the moment the big gold W of Willy Wonka appeared on stage the delight in the Theatre Royal, Drury Lane never wavered.

An extraordinary set and opening song introduced us to Charlie Bucket (inventor and dreamer!) and his love for Wonka chocolate. I loved the way the outside moved inside when we met Charlie’s family and enjoyed the way time moved swiftly through the first month of the golden ticket competition.

The TV screen showing the winners (an impressive collection of child actor/singers) was fantastic and the songs, although I couldn’t hum them to you now, were perfect for each character.

The first half came to an end as the Golden Ticket winners met Willy Wonker – played beautifully by Alex Jennings.

Act two was a riot of colour, stunning sets and inspiring storytelling. My 12yr old daughter and I laughed at the Oompa-Loompas (oh how she wants a pair of their large striped shoes!) and marvelled at Violets blueberry and Veruca’s squirrels. We especially enjoyed the tiny Mike Teavee.

The production was impressive; the songs weren’t memorable but were enjoyable and fun. As expected, there were excellent performances throughout from an energetic cast. The final trick from Willy Wonka left us (and those around us) open mouthed in gleeful astonishment! An amazing night out that ‘has to be believed to be seen’, I would recommend the show to lovers of Roald Dahl and families with children over 8yrs old.

Go to the theatre on Drury Lane in London and watch Charlie and the Chocolate factory. Full of delights and wonder. Choose a gift or more. Don't forget your tickets and programs. Go inside get into your seat and let the music get to your ears. Meet the making of chocolate and meet the characters as you discover the world of chocolate and creation. The characters of the rude four children wizz your imagination. And Charlie Bucket makes you cry. Anyway IT HAS TO BE BELIEVED TO BE SEEN!

So glad you enjoyed the show Sophie. I've sent a Wonka Bar to your mum to say thanks for your review.

Charlie and the Chocolate Factory was brilliant – Will definitely be recommending it!

I have just seen the show Charlie and the Chocolate Factory at the Drury Lane Theatre ,London and I WANT to see it again-NOW!

It is a brilliant production directed by Sam Mendes. As you know it is based on Roald Dahls dark fairy tale and the mysterious chocolate maker Mr Willy Wonker who owns a chocolate making factory.

Generations of children have grown up loving this timeless tale. Regardless of whether you have enjoyed this story before, this lavish new treatment reintroduces all the favourite characters but is new and fantastic with a great cast including hosts of oompa-loompers!

The staging is awesome and the time just flies by.

Probably not suitable if you are under 7 but absolutely suitable for a family trip to London with one of our hotels.

This is going to be a hit so do book ASAP