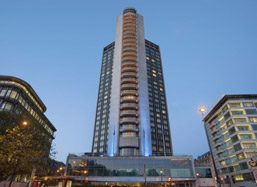 There are 16 hotels in total: twelve 4 star hotels and four 5 star hotels including the flagship London Hilton on Park Lane and The Waldorf Hilton hotels.

The first two Hilton hotels are the ones in Docklands. If you are flying into City Airport or if you are going to the O2, or if you just fancy being in that area and the price savings grab your eye with 3 day/2 night breaks including best seats for any one of a range of popular West End shows, full English breaksfast, service and VAT starting from just £155 per person at very decent hotels then these are the places to stay for you!

265 Rotherhithe Street, London, Greater London, SE16 5HW
On the south side of the river and with views over the Thames and Canary Wharf, facilities include the Terrace Restaurant, a welcoming bar and lounge, an indoor pool and health club. Historic Greenwich and its market are just 3 miles away. The Nearest tube station at Canada Water takes you into the West End on the Jubilee Line.

Almost as good a deal as the Docklands properties is the Hilton London Islington hotel located in the heart of Islington, just 5 minutes from Angel Tube Station and only 3 miles from the heart of the Capital City. I love Islington – its boutiques, pub theatres, restaurants and bars and it’s also just 2 miles from Arsenal’s Emirates Stadium if you are into that sort of thing!

Between Docklands and Theatrland is Tower Hill and here you can check into one of my favourite Hilton’s, the Hilton London Tower Bridge off Tooley Street, a sophisticated retreat in the capitals vibrant and buzzing More London’s district to the south of the River Thames by the HMS Belfast. London Bridge is your access into the West End on the Jubilee Line.

With good links on the Central line or District and Circle lines the Kensington hotels are also a great way of being able to afford to in a four star hotel – and I think if you are in London for the weekend and staying for two nights I think it is worth trying to push the boat out a bit.

179-199 Holland Park Avenue, London, W11 4UL
Only 5 minutes walk from the Westfield London Shopping Centre, the Hilton London Kensington is situated in the leafy district of Holland Park. Hotel facilities include the usual mix of  food, booze and guilt aleviation in the form of the WestEleven Restaurant, the AmPm Lounge Bar, a gym and a sauna!

2 Bridge Place, London, SW1V 1QA
The first of three central station hotels, the Doubletree by Hilton London Victoria used to be called the Hesperia, and after a refurbishment and rebrand the hotel is Hilton’s answer to the question “where do I stay if I am planning a Wicked ticket and hotel theatre break“. And a very good answer it is!

17/18 Upper Woburn Place, London, WC1H 0HT
The Hilton London Euston is very handy for those coming from North Wales, the Midlands and the North West of England and Scotland and it is only 10 minutes to Theatreland.

146 Praed Street, Paddington, London, W2 1EE
The Hilton Paddington doies the same job from those coming from the West and coming into London from Heathrow on the Heathrow Express. Originally opened in 1854 by Prince Albert, here you can wake up in the Art Deco-style rooms and re-energise in the marble bathroom just a few minutes from Oxford Street, Hyde Park, Buckingham Palace and Portobello Market.

225 Edgware Road, Marble Arch, London, W2 1JU
Just 10 minutes’ walk from the West End and Oxford Street the Hilton London Metropole is great for those with a need to shop – need I say more!

The Doubletree by Hilton London West End is at the other end of Oxford Street in historic Bloomsbury. Close to the British Museum it  is just between Russell Square and Holborn so right on the edge of Theatreland and a short walk to Covent Garden.

Half Moon Street, London, W1J 7BN
The Hilton London Green Park hotel is set between the leafy Royal Parks and the shops of Oxford, Regent and Bond Street. This stylish Georgian building still houses what is only a four star hotel, but you can’t get much closer to a five star hotel and five star surroundings.

19-21 Great Marlborough Street, London, W1F 7HL
Set in the heart of London’s bustling Soho district just minutes from famous shopping areas like Oxford Street, Bond Street and Regent Street and just round the corner from the London Palladium the Courthouse DoubleTree by Hilton London Regent Street was once a court house and the old cells are a fascinating feature of the excellent bar there!

27 – 33 Harrington Gardens, Kensington, London, SW7 4JX
Discreetly set in the leafy residential area of the Royal Borough of Kensington and Chelsea, the elegant Bentley London, A Hilton Hotel is within walking distance of the Natural History Museum, the Victoria and Albert Museum, the iconic Royal Albert Hall and Hyde Park.

All 64 of the luxurious and spacious rooms at this Kensington hotel feature high-speed internet access, Jacuzzi bathtubs and separate walk-in showers.

Sip tantalizing cocktails in the stylish Malachite Bar and treat yourself to a traditional afternoon tea in Peridot Restaurant. Work out in the Fitness Centre, unwind in the authentic Turkish Hammam and relax in the opulent Le Kalon Spa with treatments that include the unique chocolate range inspired by Dr Herzog’s patented formulas and the Oriental themed ‘La Sultane de Saba’ collection.

22 Park Lane, London, W1Y 4BE
The London Hilton on Park Lane hotel offers stunning views of London from all guest rooms the Michelin-starred Galvin at Windows restaurant,  all-day dining and the famous Chocolate Afternoon Tea in Podium, champagne cocktails in POP Bar and a stylish evening in the hotel’s celebrity nightclub, Whisky Mist at Zeta. It is probably the flashiest of all the properties buut I’ve saved the best for last..

Aldwych, London, WC2B 4DD
You have London’s West End on your doorstep at this historic 5 star hotel in Theatreland. And I no it is uncool to talk about price when you are booking a five star hotel but the Waldorf Hilton hotel probably represents the best value with a two night stay at this iconic 5 star hotel AND best seats for a London show starting at under £300 pp! I didn’t say it is the cheapest way top see London, but I think that is quite a good deal.