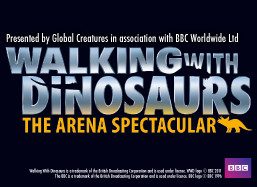 Actually it is not even 3 years but the wait has seemed longer, as this was, and will be, a jaw-droppingly amazing show!

Based on the hit BBC television series, this production has been a massive hit wherever it has toured around the world.  It is one thing to be amazed by effects on television or on the big screen, but this is live – an arena event with 20 life-size dinosaurs including the one, the only Tyrannosaurus-rex.

The Dinosaurs are Back

Of course the achievement, this extraordinary feat of engineering and design, is to be marvelled at, but the quality of the work is amazing too. No pantomime horse or Sesame Street muppet these.  Using state of the art animatronics and high-tech puppetry, Walking with Dinosaurs aims to make you feel as if these mighty beasts have indeed returned from extinction and are walking the planet again.

Sometimes, when you hand over the price of the ticket, it is hard to imagine just where the money has been spent but this theatrical event, seen by over 7 milion people around the world has a  £10,000,000.00 price tag on it!

So the audience can simply marvel at the story of their 200 million year domination of life on earth played out in front of them. Watch them walk. Hear them roar. Be there as they fight for survival and supremacy. From the ripple of their skin to the glint in their eye, you will know the dinosaurs really have returned!

Of course the papers went mad for it last time it was here: stars and exclamation marks were used like they were going out of fashion – and the Caps Lock key must have been worn out on many a Fleet Street editors keyboard.

So now it is back at the O2 and we can get to see it again, or for the first time. The performances are from 26 December 2012 to 06 January 2013 which places it right at the top of any Christmas wish list!

Create your own review
Walking With Dinosaurs
Average rating:   0 reviews