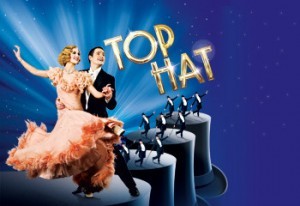 Another Golden Oldie made it to London’s West End last April.

Top Hat, WINNER of 3 Laurence Olivier awards including Best New Musical, and WINNER of the Evening Standard Best Night Out award, brings the glamour of Hollywood’s golden age and the glorious, tap-dancing magic of Fred Astaire and Ginger Rogers to the West End in one of the greatest dance musicals of all time.

Of course everyone knows (and hopefully loves) the Fred Astaire / Ginger Rogers film. In fact “film” seems just too short a word to describe what was probably the greatest silver screen dance musical of all time. And so kudos must go to this new production of Top Hat which is already earning sensational reviews from critics and standing ovations from audiences all over the country.

The Top Hat production team have perfectly captured the essence of those great 1930’s musicals. Beyond Irving Berlin’s celebrated score, featuring such classics as Cheek to Cheek and Lets face the Music and Dance, the choreography, from stunning tap to romatic ballroom, is heart stopping. The look of the show, from its sets to the 200-plus costumes is pure RKO and of course the story is giddy glorious and joyful!

Lee has spent the last six years in New York starring as Bert in hit production Mary Poppins. The actor originated the role in the West End and headed to Broadway after the show’s acclaimed 2 yr run at the Prince Edward theatre ended. He has also appeared in numerous West End shows including Crazy For You, Peggy Sue Got Married, Me And My Girl and Oklahoma.

Top Hat is playing at the  Aldwych Theatre on the Strand which was home to Chicago before it transferred.

The hotels nearby include the 5* Savoy, the 4* Guoman Charing Cross and the 3* Strand Palace. Other worthwhile hotels are the 4* Kingsway Hall, the 3 star Thistle Trafalgar and the five star Radisson Edwardian Hampshire. So lots of choice on the doorstep. If you would rather stay elsewhere in town then it is very easy to get to the theatre by tube: Covent Garden and Charing Cross Underground stations are both within 5 minues walk and a whole host of buses pass right outside from all over London.

It previewed from 19 April 2012 and received excellent reviews from the start.

And if you get carried away and want to become a ballroom dancer yourself – just go to www.ballroomdancers.com