The brilliant production of The Resistible Rise of Arturo Ui, starring Henry Goodman, has now closed. Check what is now on at the Duchess Theatre. 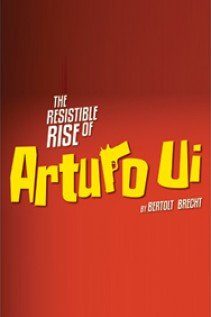 A satirical allegory of Adolf Hitler in Nazi Germany the play is set in Chicago during the The Great Depression, in a time of discontent and high unemployment.  Arturo Ui (Goodman) is a small-fry crime boss and he and his henchmen take it upon themselves to run protection rackets for both workers and businesses.

Soon Ui’s menacing shadow looms large, from the markets, to the docks and across the city itself: you might be with him, you might be against him, you may find yourself being, but can you stop him?

Henry Goodman most recently starred in The Winslow Boy. Other London stage credits include Yes, Prime Minister at the Gielgud Theatre in 2010 and Duet For One at the Vaudeville in 2009.

He also starred in Fiddler on the Roof at the Savoy, Chicago at the Adelphi in 1998 and Guys & Dolls at the National.

The Duchess Theatre is on the Aldwych so any hotel near Covent Garden and the Strand would be close enough to walk from. The Strand Palace Hotel, The Savoy, The Kingsway Hall, even the Travelodge Covent Garden will offer an excellent choice of accommodation.

If you don’t want to splash out for West End accommodation then the closest tube stations are Covent Garden , Charing Cross and Holborn, all giving you access to large swathes of the city in just a few juddering stops of London’s underground network.

Performance times for The Resistible Rise of Arturo Ui:

The Chichester Festival production of The Resistible Rise of Arturo Ui, plays at the Duchess Theatre until 07 December 2013.