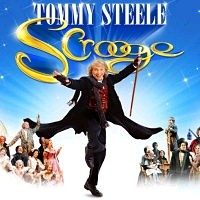 Scrooge the Musical returned to the London Palladium for Christmas 2012/2013, with the one and only Tommy Steele as the miser visited by the ghosts of Christmas past, Christmas present and Christmases yet to come, for a great seasonal production on a strictly limited run before A Chorus Line comes to town!

Of course neither Scrooge nor Tommy Steele need much introduction from the likes of me! Just by mentioning Hollywood movies such as Finian’s Rainbow and the legendary Half a Sixpence and London shows including Hans Christian Anderson and the smash hit production of Singin’ in the Rain you will be reminded of Mr Steele’s pedigree.

The musical version of Dickens’ heart-warming story of the miserly Ebenezer Scrooge whose festive spirit is restored is by Leslie Bricusse, whose other major musicals include Doctor Dolittle and Stop the World – I Want to Get Off.

The production is topped off with some Harry Potter magic – yes magician Paul Kieve, acclaimed for the magic effects in the Harry Potter films, pitches in with some very special illusions.