Back for the Christmas season, the hilarious comedy Peter Pan That Goes Wrong written by the Olivier Award winning trio of Harry Shields, Henry Lewis and Jonathan Sayer who currently have two other plays in the West End – The Play That Goes Wrong and The Comedy About A Bank Robbery was a huge success 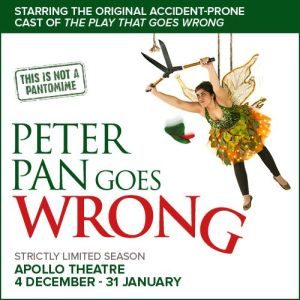 If you are looking for a slick, smoothly-run, word- perfect performance then do not book to see members of the Cornley Polytechnic Drama Society’s seasonal production of J M Barrie’s classic Peter Pan which was on at the Apollo theatre until 31st January 2017.

Starring the original accident-prone cast of The Play That Goes Wrong and The Comedy About A Bank Robbery, what ever can go wrong on stage does go wrong as the amateur dramatists battle against technical hitches, flying mishaps and cast disputes. Will they ever make it to Neverland?