Home > Archive > Let It Be is Back in London

Let It Be Theatre Breaks in London are no longer available to book.

The music of the Beatles is as much-loved now as it was 50 years ago and the return of  Let It Be in 2015 proves that Let it Be Theatre Breaks are a great way to celebrate a monumental anniversary. 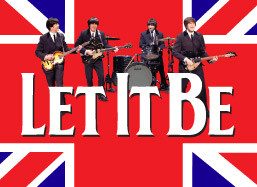 Let it Be is an unashamed spectacular theatrical concert crammed full of The Beatles’ hit songs.

The show relives The Beatles’ rise from Liverpool’s Cavern Club, to the heights of Beatlemania.  How I hear you ask? Using video footage to tell the story of the band’s meteoric rise from their humble beginnings. We will be able to enjoy performances of those songs we love so well: early tracks including Twist and Shout, She Loves You and All My Lovin’, as well as global mega-hits Yesterday, Hey Jude, Come Together and, of course, Let It Be.

The show is on at the Garrick Theatre just by London’s famous Leicester Square – a great venue for a London theatre break as it is right in the heart of the West End, just mintes from Covent Garden, Trafalgar Square and Piccadilly Circus. This is where you will be able to experience this multimedia rich electrifying spectacle which takes you back to the magical sixties when all you needed was love, and a little help from your friends!

Ticket and hotel packages for Let it Be Theatre Breaks are available from 28th February to 27th September. If you are looking for hotels close by then there is the Radisson Edwardian Leicester Square or the 3 star St Giles Hotel. The 4 star Strand Palace Hotel is not far too and of course there is always the 5 star Savoy!

Nearest tube : Leicester Square on the Northern and Piccadilly lines

Let It Be Theatre Breaks Reviews

Create your own review
Let It Be
Average rating:   1 reviews
by Roger Carpenter on Let It Be

so glad this is coming back - I saw it at the garrick earlier in the summer and it was brilliant - now I can add it to my Christmas list again!