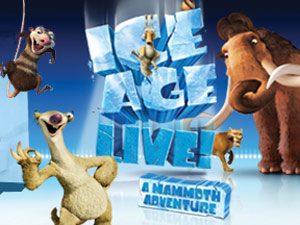 Larger than life arena spectacular breaks are now on sale!

Twentieth Century Fox Consumer Products and Stage Entertainment Touring Productions are proud to present Ice Age Live! – A Mammoth Adventure – a spectacular new show, with all your favourite movie characters brought to life this year at the Wembley Arena, London!

There will be action packed thrills, eye-popping effects, mischievous humour and toe-tapping songs as the loveable characters Scrat, Manny, Ellie, Peaches, Sid, Diego, Buck, Eddie and Crash come to life and embark on a journey of discovery in a brand new storyline, with several new characters created for the live show.

See your favourite characters from the Ice Age films live on stage in this new epic production. Ice Age Live – A Mammoth Adventure combines film animation, puppetry, acrobatic Ice Skating and ariel arts all together in a stunning piece of family entertainment.

Since the first film was released in 2002 Ice Age has achieved huge success, with two follow up films Ice Age: The Meltdown and Ice Age: Dawn of the Dinosaurs and a fourth film, Ice Age: Continental Drift, due out in summer.

Ice Age Live – A Mammoth Adventure is directed by Guy Caron, who is best known for his work on the iconic Cirque du Soleil productions Ka and Dralion.

Packages include Tickets to see Ice Age Live – A Mammoth Adventure at Wembley Arena plus overnight accommodation in a choice of London hotels. Package can either include best seats or more affordable bargain seats