High Society Theatre Breaks are no longer available to book.
See what’s on next at the Old Vic theatre 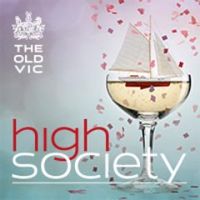 Friedman (Merrily We Roll Along), the Old Vic will transform itself into the Rhode Island mansion of the Lord family where socialite daughter Tracy Lord will wed George Kettridge in Cole Porter’s timeless musical High Society.

With the wedding preparations in full swing into the mix comes Tracy’s ex-husband, Dexter, who is still in love with her and desperate to win her back before she re-marries plus a tabloid reporter, Mike, sent to cover “the wedding of the year” who also falls under Tracy’s spell.

High Society Theatre Breaks, features the musical High Society, based on the play The Philadelphia Story, became a successful 1956 MGM musical starring Bing Crosby as Dexter, Grace Kelly as Tracy and Frank Sinatra as Mike. It features a fabulous score with hit songs including “True Love”, “You’re Sensational”, “Well Did You Evah?” and the unforgettable “Who Wants To Be A Millonaire?”.