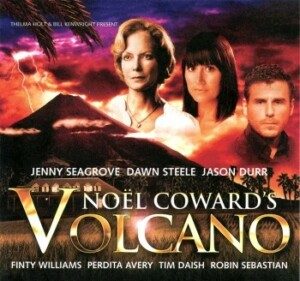 A new production of Noel Coward’s Volcano saw his more saucy side come out as Jenny Seagrove starred in the play that was  originally intended for Katherine Hepburn.

Coward’s tale of sun, sand and seduction is a gripping romantic drama written in 1956 during his self-exile in Jamaica but not performed during his lifetime.

Set on a Pacific Island dominated by its very own volcano, the play follows the entangled love lives of widow Adela Shelly, her friend Ellen, the suave Guy Littleton and his wife Melissa.

Volcano is directed by Roy Marsden