The next show at the Garrick theatre is Let it Be

I will watch it just to see Robert Vaughan live on stage. From The Magnificent Seven to Hustle, via The Man from U.N.C.L.E., I have loved watching him act all my life, but never had the chance to see him on stage. 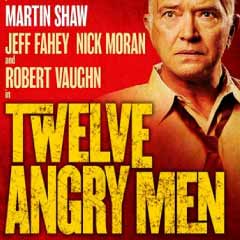 Twelve Angry Men, if you haven’t seen the 1957 film starring Henry Fonda, is about a jury and their deliberations over a case of  a young boy from the slums who is charged with killing his father. The jury retire to consider the verdict and quickly eleven members declare they think the boy to be guilty. However Juror number 8 asks them to “just suppose” his innocence before sending him off to be executed.

This taughtly crafted play will have you gripped as what is first believed to be true is questioned and revealed to be prejudice.

Performance times for Twelve Angry Men are as follows:

Monday to Saturday at 7.45pm

For Twelve Angry Men Theatre Breaks we suggest the 3 star St Giles Hotel – just walk up Charing Cross Road and you will find it behind the Dominion Theatre. Otherwise for a bit of 4 star luxury try the Radisson Edwardian Leicester Square (you will have to walk past the 5 star Hampshire Hotel to get there though so you may want to reconsider!

If you want to stay elsewhere in London the Garrick is just down from Leicester Square Tube station and close to Charing Cross too so you can get pretty much anywhere in London really easily!