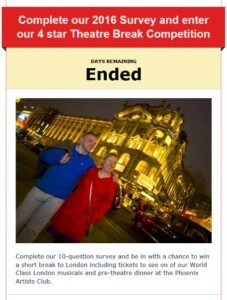 The data from Theatre Breaks’ Theatre Survey, released this week, presents an interesting snapshot of the views of theatregoers from around the UK.

What they think about the theatres that they go to and the shows that they see.

So what do the heads attached to the bums on seats think?

We want to be Willy Wonka and Mary Poppins but we want to see Wicked and however much the theatre industry worries about improving their product, most of us just want a smile!

Here are some highlights from the Theatre Survey by Theatre Breaks released this week.

2016 has seen the theatre industry focus in on the behaviour of audiences. But as theatre tries to become relevant to a wider proportion of the population, the traditional theatre audiences are feeling more and more under threat, as new audiences introduce new problems and theatres try and find more ways to access the consumer wallet.

So as 2017 sees ushers clamber over chairs to deliver drinks and theatres considering firing lasers in an attempt to stop unsuitable behaviour, what do our audiences think as they try to concentrate on the show being performed in front of them?

The top shows we want to see next.

Amazingly after 10 years, Wicked is still the pick of the crop when it comes to West End musicals folks wish to see but increasingly amongst the more irregular theatregoers. For the first time ever it rose above Les Miserables as the Parisian waif slipped into 3rd behind Disney’s The Lion King.

Motown and Aladdin, both 2016 newcomers, have made an immediate impression in the top 10. With the closing of War Horse, Harry Potter and the Cursed Child took over the mantle of the play most people want to see – not that it will do anyone any good!

Quote of the Survey: Next show? Les Miserables (I only have 2 more times to see it and I’ll have been 200 times)

For a show to be a success, the audience should feel an empathy with the characters. So beyond the question of what show audiences would like to see, we asked what characters they would like to be. 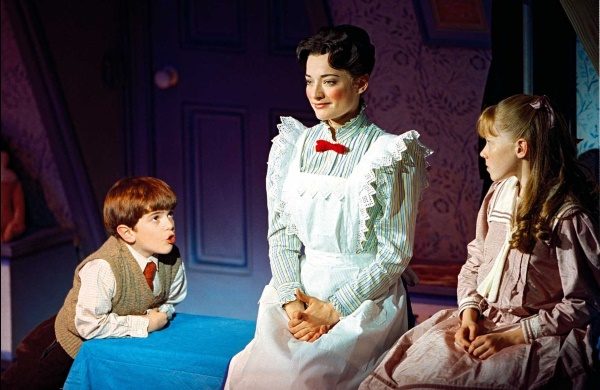 Voting, women all seem to want special powers – with Mary Poppins, Elphaba and Matilda holding the top three spots. Next on the list are magically connected Cinderella and Dorothy – showing that if you can’t have magical powers yourself, make sure you know someone who has! At six, Sandy, from Grease, is the only relative normal one amongst them, but even she is able to put in a fairly major transformation when she needs to get her man. 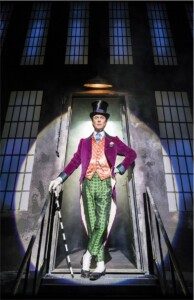 Willy Wonka grabs the top spot for the boys but the rest of the top 5 are a much more mixed bag, completed by misunderstood but heroic Jean Valjean, mysterious Phantom, cool Danny Zucko and unique Shrek!

Ignoring the theatre industries angst about gender casting, popular roles for the women included Aladdin, Charlie Bucket, Billy Elliot and the Artful Dodger. Of course the boys have a traditionally rich source of female roles in Trunchbowl, Turnblad and Twanky, but others were just as keen to be Eponine, Sally Bowles and Elphaba!

Unsurprising the votes were split down the middle of the gender divide for Rocky Horror’s FranknFurter!

Quote of the Survey: “I used to think I was Danny Zuko, increasingly I fear I’m Edna Turnblad.”

Mobiles are becoming more of a talking point, with actors stepping out of role to admonish forgetful or selfish audience members or audience members taking it upon themselves to administer punitive measures. 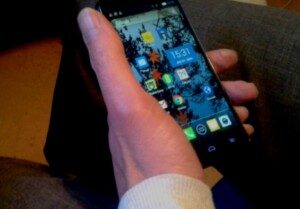 We asked what people would like to see, put in place, to deal with transgressors. The most popular solution is a personal plea, live on stage, but a surprising number thought that stewards could do more, although the idea of laser-wielding ushers was not so popular.

We suggested a range of measures. Here they are in order of popularity.

Of course, there is nothing to stop a theatre adopting all of the above measures and any more that they can think of – it obviously is a major problem and one that needs dealing with.

How welcoming was the theatre?

Forget all the razzmatazz on stage or the grandeur of a Grade One listed, Jewel Box theatre, any theatre, on any night must make sure its guests get a good welcome. A friendly face and a helpful word in the foyer is as important as all the glitz and glamour on stage, if not more so. It also comes cheaper than a TV star in the cast or extra toilets in the basement!

This year we focused more on what audiences think that theatres can do to improve their welcome – with both limited option questions and open questions, giving audiences the opportunity to let their imagination run riot.

If we are being positive, a massive 93% of UK audiences feel either “very” or “quite” welcome at the theatre with less than 2% critical of the welcome. However, dig down and these figures hide some  unwelcome truths.

Over 30% of audience who, in a very British way, felt only quite welcome, had a lot more to say, about their night at the theatre, when asked to offer suggestions. Friendliness at the door is key. More smiles, more welcoming words, but also more help is needed. Plus more information (both verbal and visual) about where to go and what to do.

Being part of a large crowd, in a small, dark, unfamiliar area, can be very disconcerting and even the most experienced of theatregoers can feel lost and vulnerable in an unfamiliar venue. 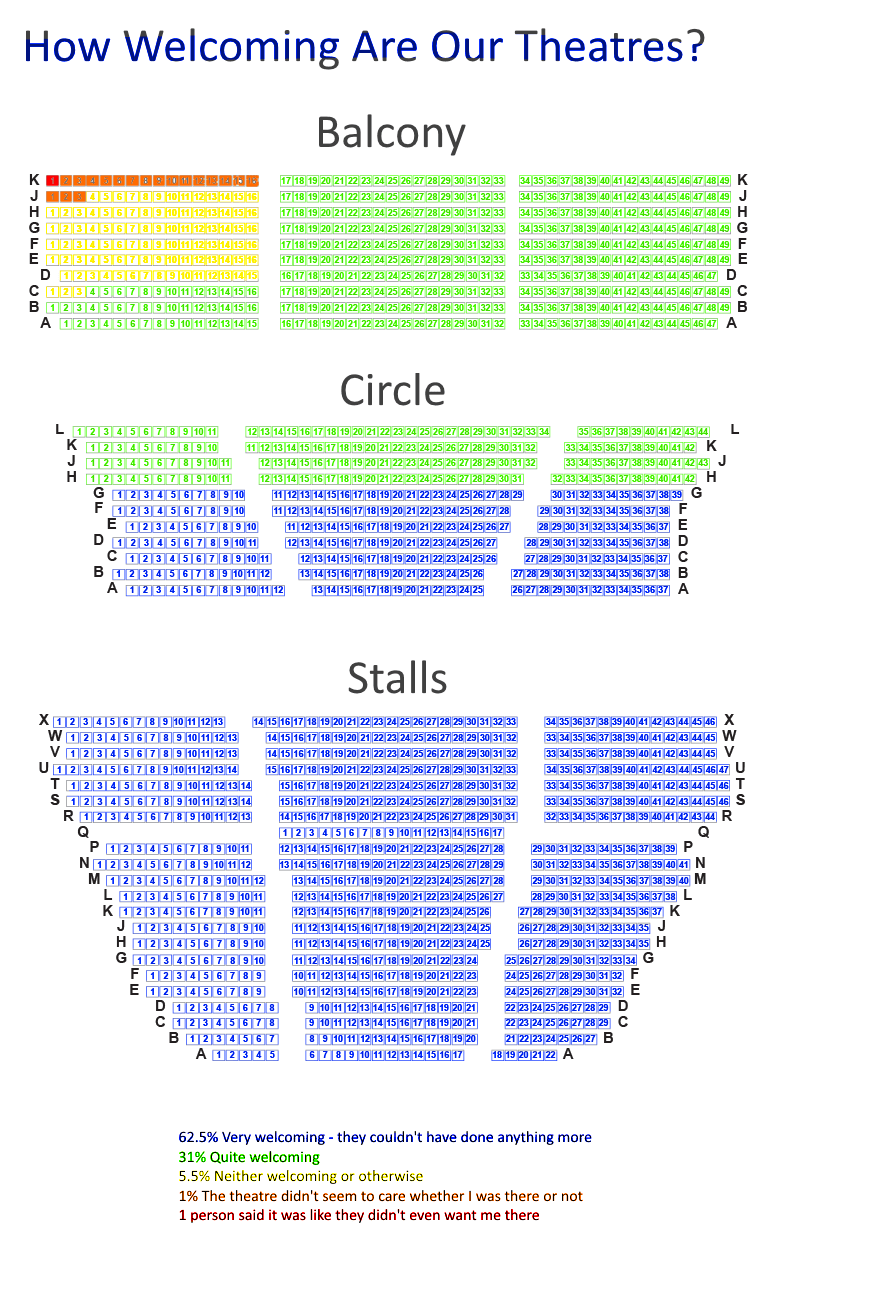 The serving of drinks always attracts a fair amount of attention – both the price and the hassle. Interestingly women were far more interested and supported the idea of seat service relatively more than men, whilst men, were more focused on the price – probably because they normally pay whilst the ladies are queuing for the loo!

Lasers to attract the attention of disruptive audience members

Although one of the most popular solutions to the mobile phone problem is stewards on duty as auditorium monitors, the use of lasers to attract the attention of disruptive audience members was one of the least favoured technological advances – we obviously prefer a more public shaming!

Along with using lasers to attract the attention of noisy audience members, the idea of silent snacks was most enthusiastically greeted by men.  In-theatre catering arrangements have come a long way in recent years and, if you can’t get it in the theatre, some audience members will go out and get it at the shop next door and are allowed back in with their booty. Consequently the lines are blurred between what is and what is not acceptable.

Quiet snacks seem to go some way to easing the problem, but how quietly the snacks are offered around and how quietly they are chewed is a matter for the individual (who may well decide that they need to use the torch app on their phone to read the legend on the inside of the chocolate box!)

They are all daft

Try as we might to offer new and exciting ways to improve the theatre-going experience, some people just want a smile, a seat and a good show! So it is worth mentioning the 455 respondents who thought that all of our new ideas are daft!

New Ideas – in order of popularity

What can theatres do to improve their offering.

Of course the standard responses get an airing, every time anyone asks the question. The bar is expensive, the ladies loos too few, the seats are too uncomfortable and the other members of the audience are annoying!

But, with the best will in the world, even with the support of campaigns like the Spend A Penny campaign, these are not going to change drastically. Also there are contradictory demands: warmer theatres, colder theatres, more snacks, less snacks, drinking banned, drinking allowed,

What is interesting is the three suggestions that are well within the powers of almost all theatres.

And there are things that theatres are ALREADY doing:

The full list of ideas for theatres to improve their service (from audiences and theatres) is available – contact theatrebreaks.co.uk

Theatre audiences are split into two main groups: those who are happy to be there and those for whom a trip to the theatre is out of their comfort zone and therefore need more help.

Can we succeed in maintaining a welcome for one without alienating the other? We must hope so.

But, as Sondheim’s Witch says in Into The Woods, “wishes come true, not free!”

Quote of the Survey: “We weren’t allowed to buy pints even in plastic glasses which was a bit awkward for the men.”

Theatre Breaks’ 2016 Theatre Survey is not an exercise in finding fault but an opportunity to discover how theatres can improve their front of house product. But, where we have enough data, we can start to see some patterns emerging and it can give us an idea as to which theatres are currently offering the best and worst services.

So, it would be remiss of us not to give a friendly nod to the staff of the theatres that are already, demonstrably giving patrons a hale and hearty welcome.

So here is London’s most welcoming West End theatres. 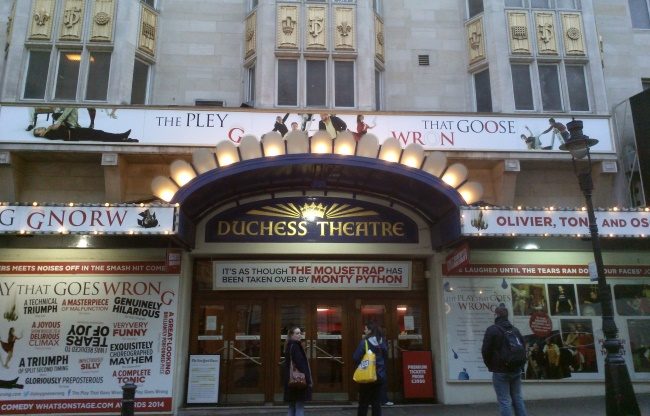 Congratulations all!
Further information on the data collected by the Theatre Breaks  Theatre Survey is available by contacting Simon Harding at TheatreBreaks.co.uk

The theatre survey was conducted over 2 months up to 01 December 2016.

It was hosted on the Theatrebreaks.co.uk website and all data was taken online.

The survey was promoted through a variety of theatre, lifestyle and travel websites, email mailing lists and social media and was restricted to UK residents who consider themselves “theatregoers”.