Les Misérables Theatre Breaks have captured the imagination and enthusiasm of the theatre-going public for over 35 years. And against all odds: it’s back! Making it a great time to come to London and see Les Miz in all its glory! 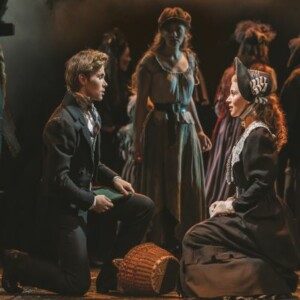 Since this stunning adaptation of Victor Hugo’s epic masterpiece was first performed in 1985, Les Misérables has been performed in 52 countries, 221 cities and sung in 22 different languages. It has  earned itself a unique place in musical history by winning awards all over the world. This includes an unprecedented eight Broadway Tony awards. In 2010, it was performed in three different London theatres simultaneaously.

Night after night Les Miserables Theatre Breaks guests are swept away by the power, the passion and the triumph of human spirit of one of the most famous, and well-loved musicals.

A New Show for Les Miz

After closing for a re-vamp in 2019, Les Mis has returned in 2022 better than ever before.

The Queen’s Theatre closed for 4 months over the summer and autumn of 2019 so it could have some much needed renovation work done to it (the theatre was hit by a bomb in World War 2 and now  the owners decided to renovate it to its pre-blitz look).

As well as work backstage they have also added more loos for us all, but especially the ladies!

But now they have finished and Les Miserables is will return and the Queen’s Theatre will henceforth be known as the Sondheim Theatre!

Les Miserables Theatre Breaks, including tickets and hotel accomodation continue to be the most popular choice amongst theatregoers to London, so keep an eye out for the fully staged show re-appears. Until that time we will all enjoy the concert version.

The Sondheim Theatre is not that far from Leicester Square Tube station as well as Piccadilly Circus for guests staying outside the West End.

For pre-theatre dinner either nip across the road to China Town or behind the theatre into Soho. There is a wide variety of cuisines available in Frith Street and Dean Street, which are my two favourite streets for dining.

I am, as people who know me know, completely obsessed with the musical ‘Les Misérables’.
Surprisingly, the show received an appalling reception at first, with harsh and condemning reviews from the critics, but today has to be one of the most, if not the most, popular production in London.
People have asked me what it is about the show that has made me so obsessed with it, that’s difficult to answer but there is something about Les Misérables – maybe it is the powerful performances, the music, or that moment when a red flag flies on top of a barricade during ‘One Day More’ (which, in my opinion, is undoubtedly the best end-of-act-one number in any musical)… I don’t know, but there is something that is so moving, so powerful, that it makes an impression that is impossible to forget.
From the first time I sat and listened to the Complete Symphonic Recording in 1988, Les Miserables grabbed me and has never let go. From the first note to the last it is completely musical, and with no ‘spoken’ conversation it is unlikely to appeal to everybody. Not a day goes by without me listening to at least 6 of the songs from the show, whether it be in my home or car, and I still cannot listen to some of the songs without getting goosebumps (especially ‘One Day More’), or tearing up a little (Empty Chairs At Empty Tables).
My recent visit to see Les Miserables was in June, for what would be my 198th time.
I watched the show knowing that I would, of course, LOVE every second and it was the first time seeing the show following the cast change. It does have to be said...they were SPECTACULAR!!!
Peter Lockyer was simply perfect, and I still maintain he is easily one of THE best 'Valjean's I have seen, only the hardened of hearts couldn't be moved by the passion and emotion in his 'Bring Him Home' and 'The Epilogue'.
Jeremy Secomb as 'Javert' was on a par with Phillip Quast in quality of performance, and the power of 'Stars' and 'Javert's Suicide' gave me goosebumps and very teary eyes.
Other cast members who certainly deserve a mention, are the fabulous Craig Mather as 'Marius' who, quite frankly, impressed beyond words. David Langham and Katy Secombe who were both seriously (or should that be comically) outstanding as the 'Thenardier's.
My love and obsession with Les Miserables will never diminish and I will always believe, and proclaim, it *IS* the greatest Musical EVER.
Les Misérables is absolutely stupendous and has now seen by over 70 million people, in 44 different countries. Also, having recently celebrated its 30th anniversary, it is the longest running musical in the West End, with well-deserved standing ovations at every performance. And it’s not difficult to see why.
Just take my word for it, go and see Les Misérables at the Queen’s Theatre.

Thank you for that superb insight into the show. Les Mis is very lucky to have super fans like you!

Fantastic show ...everything you have heard about the show is right.... it is that good .Theatre has great atmosphere.Actors were great ....go and see it you won't be disappointed

had,'t seen Les Mis since it left the Palace Theatre way back when. So glad to see that it is just as good now.

I saw this 20 odd years ago when (fellow-drama school student) Simon Bowman was playing Marius and now he's the main man singing his heart out as Jean Valjean. And what a richly beautiful singing voice it is too!
Equally, gobsmackingly brilliant is the superb bass baritone vocals of Hans-Peter Janssens (Javert) moving me to tears with the soaring power of "Stars".
Obviously over the years, bits have been added on and taken away to keep the production fresh. Some of the additions weren't, in my opinion, entirely necessary and made the first half extremely long - especially for my 8 year old son who got the wriggles between "Stars" and "One Day More".
However, he was extremely pleased that Epinine showed a good splattering of blood across her chest in the 2nd half and that Enjolras had the obligatory musket wound at the end of the Baricade scene.
A favourite with both my children was, of course, Gavroche, who sported an uncanny likeness to a colleague's 12 yr old son which made him all the more apealling. My son even gave him a standing ovation when he came to take his bow.
In summary, after almost 30 glorious years this show still has the WOW factor
and I would highly recommend it to all theatre lovers and even those who are taking the first steps into the exillerating world of musicals. You can not go wrong with Les Miserables. 5 stars!