Wicked Theatre Breaks have been casting their spell over visitors to London for a decade. Internationally, it has won over 100 awards whilst it continues to be a “West End sensation” (Daily Mail) in London.

In London it recently played its landmark 3500th performance.

Firstly, Wicked Theatre Breaks are now available with discounts on tickets of up to 30%. So check availability for your preferred dates.

London’s spellbinding and spectacular smash hit musical, Wicked, tells the incredible untold story of the legendary witches from L. Frank Baum’s classic The Wonderful Wizard of Oz. Most importantly, Wicked explains why one witch came to be called ‘good’ and the other ‘wicked’. 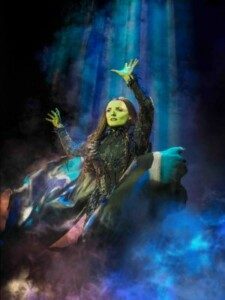 Wicked is a great show: special effects, a great cast, a proper band and amazing scenery and costumes – AND it’s a good story!

We are blessed with great seats on our allocation which mean you get a really great view with Wicked Theatre Breaks. All-in-all, a brilliant highlight to any London Theatre Break.

First of all, the music is typical American, modern musical stuff: dazzling chorus numbers, massive power ballads and dramatic underscoring. But there is light and shade allowing the characters their quiet times of introspection on stage!

The idea is that this story is all happening “off stage”, as it were, in “The Wizard of Oz”. So we get glimpses of the other story as we follow this one: making the audience feel very clever and pleased with itself as we recognise the references! Very much adding to the fun of the piece without dominating it too much.

Book a Wicked Theatre Break to experience this unforgettable musical. You’ll discover that you’ve not been told the whole story about the land of Oz!

Book a break and save money by selecting one of our Top Price Saver tickets. At this theatre, look for the tickets right at the front of the stalls for some AMAZING theatre and hotel packages deals.

Furthermore, as the theatre is right near Victoria Station, getting there is easy.  So don’t forget our discounted rail tickets! 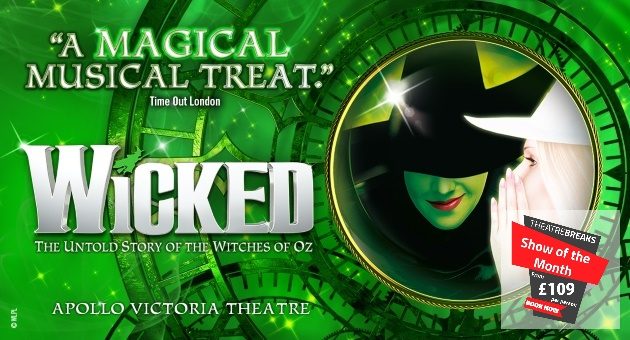 Wicked is at the Apollo Victoria Theatre in the Victoria area of London, just behind Buckingham Palace. Consequently it is away from the main theatreland area surrounding Soho and Covent Garden. The Apollo Victoria Theatre has a great range of nearby hotels – especially 4 star hotels. This means that you have a great choice of hotels at great prices. Therefore Wicked Theatre Breaks (ticket and hotel package deals) are amongst the best deals in town.

Similarly you will enjoy the more modern hotel, the Double Tree by Hilton. It even has a gym if you are feeling restless (because the 200 yard walk to the theatre is certainly not going to keep you fit!)

The three star Huttons Hotel will help save you some pennies. Breakfast is served in its own restaurant, but there is no bar. However, for 50p more (on many nights) you stay at the Pestana Chelsea Bridge Hotel and Spa. It may be 800m further away from the theatre but that 50p buys you an extra star, a gym, a pool, a bar and a restaurant!

Finally, if you want to push the boat out, the 5 star Mayfair hotel is less than a mile away. Joining its A list celebrity guests at the bar after an evening performance of Wicked is the perfect way to end a London theatre break!

Wicked is a must see show!

by Jane Williams on Wicked

My two friends and I have just returned from our theatre break to see Wicked, staying at the Grosvenor Victoria.

We had a great time. We were very impressed with the hotel, which had old style charm and didn't appear 'corporate' in any way. Also our seats were excellent too at the theatre for an enjoyable show. My friends thought the whole package was such good value, they said they will look on your website when they next want a trip.

Thank you for your hotel recommendation, and assistance with our 'break'.

by Beth on Wicked

Wicked was superb. Cast and staging were fantastic. Defying Gravity left me in tears it was sung so well and powerfully.

by Gail Smith on Wicked

Absolutely fantastic by far the best musical i have seen in a long time. If you take children , make sure the see Wizard of Oz afterwards