Every year Theatre Breaks takes a look at the thoughts and habits of UK theatregoers.

It seemed that the biggest talking points in 2015 were celebrity stars and the price of tickets, so we thought we would take a closer look at what you think about both.

Who is the biggest star that you have seen in a live theatre show?

We asked theatregoers to name the biggest star they have seen at the theatre.

Whilst Michael Crawford and Michael Ball faired well for the boys and Dame Judi Dench and Elaine Paige featured for the girls the out and out winner, featuring almost twice as often as any of his fellow thespians was that Aussie superstar and heart-throb: Jason Donovan. 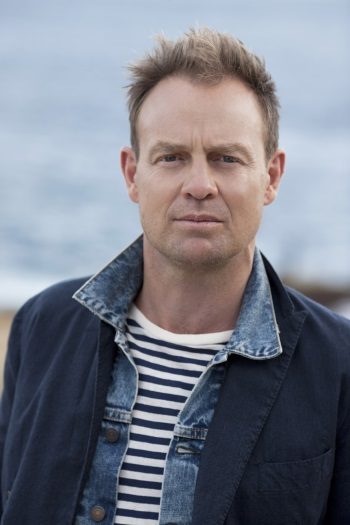 His appearances in popular musicals such as Joseph and His Amazing Technicolor Dreamcoat and Priscilla Queen of the Desert have helped to propel him to the top of the list.

Top Stars Seen in a Show in the UK

How many times do you go to the theatre – either locally or elsewhere?

Interestingly it is this group who are the ones to whom a star name is most important. So whilst the argument that big stars like Cumberbatch and Tennant may tempt some first timers to the theatre, the likelihood is that it is the theatre super-fan who is going to be parted most easily from their hard earned cash.

How much is the most expensive ticket you have ever bought?

They will also pay more for the honour too. Asked the value of the most expensive theatre ticket bought, it becomes clear, what value, different sections of the audience, place on their pastime!

Would you go to the theatre more often if top price West End tickets were only £40?

Interestingly the promise of cheaper seats had the same effect on everyone, with negligible variation (between 88.8 and 90.4%) of those promising to go more often however often they already go!

It was however the amount that they paid which separated our theatregoers – the biggest vote for cheaper seats came from those who have already paid over £100 per ticket.

Oddly the second biggest vote for cheaper seats came from the folk who didn’t know how much their highest ticket purchase price was! I am not sure what Oscar Wilde’s Lord Darlington would make of that, but it may well be that theatregoers need to know the price of theatre tickets before they complain about the value!

Having said that, it is not just the cynics amongst us, who seem oblivious to the fact that the average ticket price paid in London is only £3 more than our promised nirvana of a £40 ticket and that outside the West End it is considerably less!

Independent studies by SOLT and TheatreUK have found that theatregoers paid an average of just over £42 in the West End (SOLT), just under £28, taking London as a whole, or just under £24 (Theatre UK) in the UK as a whole (not counting central London).

Maybe the scare stories of inflated ticket prices are the problem rather than the ticket prices themselves. Then again 10% of our data source have already paid over £100 for a ticket and 14% would consider paying over £200!

What do enjoy most during the interval?

One of the annual gripes of theatregoers are the prices of interval refreshments – no wonder: only 1 in 3 of us seem to be able to withstand the lure of a tub of ice cream or a G&T as the curtain falls on the first half of our chosen play or musical!

So what do we want to see next.

Considering that our survey was of theatregoers, 38% professed to going more than 4 times a year it was surprising to see some of the older shows still there. 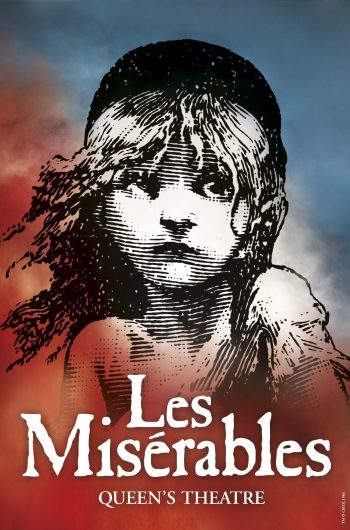 Top Shows To See Next

Les Misérables even topped the list when we filtered it down to regular theatregoers – who go more than 4 times a year. Newer shows did do better (specifically Kinky Boots, Beautiful and Gypsy) but Wicked, The Lion King and Jersey Boys still did well in the top 10.

Of course drawing conclusions from these snippets is tricky although they are at least representative of full data, but what these figures say to me is that, whilst theatregoing can be an expensive business and, if you want to do it more often, you are going to have to pay for the efforts of the production companies who keep the shows current by featuring the big names of the day, it is not as costly as the headlines would have you believe.

Also there are a lot of shows out there. 128 different plays, musicals and comedies were mentioned when we asked you what show you would would like to see next. That is enough to keep even the most avid theatregoer happy for several years.

As one in three of us demonstrate: you don’t have to spend anything at the interval and you only really need to buy a programme if you want Jason Donovan’s autograph!

But when it comes down to what show is popular, we are not a very adventurous lot. Even amongst  regular theatre goers only two shows in our top 10 have been running for less than a year (Kinky Boots and Beautiful). Is this something to do with the cost or do we just want to see what we are comfortable with.

Also the strangle hold that musicals have on our theatregoing preferences is still just as tight. The split of plays (58) and musicals (67) was fairly equal until you consider the number of each in existence – Shakespeare alone wrote 37 plays! – and of course each musical received many more votes than most plays with only 12 plays making it into the top 50. Here are the top 5.

So what does this mean for the future of theatre-going in the UK? Are star turns really the saviours of UK theatre (beyond Jason Donovan of course)? It would seem not. How important is ticket price? Well maybe it is more about choice than actual cost. And should we be worried that the same old shows are still in town, year after year? Definitely not! 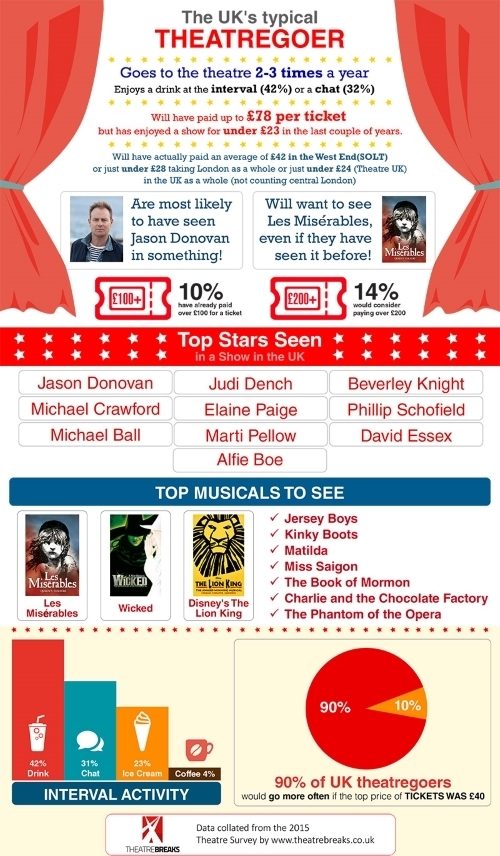 The theatre survey was conducted over 2 months up to 01 December 2015.

It was hosted on the Theatrebreaks.co.uk website and all data was taken online.

The survey was promoted through a variety of theatre, lifestyle and travel websites, email mailing lists and social media and was restricted to UK residents.