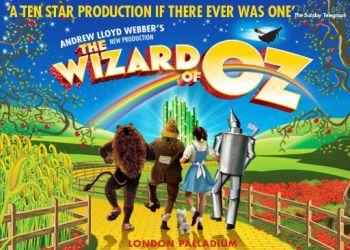 The Wizard of Oz at the London Palladium

Hotel and The Wizard of Oz Theatre Breaks in London

Last year, Andrew Lloyd Webber brought back The Wizard of Oz, the classic story of Dorothy and Toto and the friends she meets on her journey through Oz in a new West End production starring Danielle Hope, winner of BBC’s ‘Over The Rainbow’ show and Michael Crawford as The Wizard*.

But one cast change later it’s time to click those heels and head home as the production closes on 02 September 2012.

Scrooge The Musical starring Tommy Steele is now at the Palladium

Lloyd Webber’s new production of the all time classic The Wizard of Oz was developed from the ever popular MGM screenplay and contains all the much-loved songs, the wonderful characters and classic moments that we all know and love.

This is a great family show even though at 2 hours 30 minutes it is a late night for the very young family members. That said it is a wonderful piece how-ever old you are and you don’t have to bring the kids as an excuse for coming.

The Wizard of Oz Cast

Hotels and The Wizard of Oz

The closes hotel is the 5 star Courthouse Hotel just down the bottom of the road but the theatre is only 50 yards from Oxford Circus Underground station so any hotel along the Victoria, Bakerloo or Central lines are easy to get back to. Check out the Victoria area, or Bayswater for some really cheap 3 star deals.

In general it can be quite tricky to find hotels which can host a family of 4 in London. Most will host 2 adults and one child (although that is not a rule!) but we don’t know of any hotels which can sleep two adults and three children… then again would you really want to? Of course you could go for the Youth Hostel – or the Generator Hostel in Kings Cross if you want to revisit your travlling days: think east coast Australia party hostel!

Otherwise good hotels for The Wizard of Oz for the small to medium sized family include:

So click your heels three times and join Dorothy, Toto, Scarecrow, Tin Man and Lionon their journey through the magical land of Oz to meet the Wizard to make their wishes come true – a fantastic musical treat for all the whole family.

The Wizard of Oz Show File

Create your own review
The Wizard of Oz
Average rating:   7 reviews
SaraB
by SaraB

I thought it was a terrific family show. The sets were magnificent and the audience were thrilled with the "flying" - especially when the Wicked Witch is flown down into the auditiorium. Very strong cast all round.

I knew from reviews across the web that we would have problems with the view regarding the Yellow Brick Road and Ruby slippers, but I was not prepared to not see ANY of it all !! Not only did we not see the road or slippers, we did not see the house falling on the witch or her apparent legs sticking out from under it ! The stage is sooooooooo high , I honestly think these seats should be bottom price.

That said..... from the knees up....this show is FANTASTIC !!!! The effects are wonderful and in my eyes the Wicked Witch steals the show - she is perfection !

Danielle Hope was lovely as Dorothy . After the show she met and had photos taken with everyone that asked! Not sure how long she can keep that up... but it was appreciated by all! The tin man was hilarious with brilliant comedic timing and the lion and scarecrow also gave a good performance as did Michael Crawford.

This is a no expense spared production .... perhaps if they had the stage at a slight angle (like for example the Blood Brothers staging) this would improve the view no end from the front stalls....after all...if you go to see The Wizard of Oz you really DO want to see the Yellow Brick Road and those Ruby Slippers...........and the little dog too !!!!

This was certainly a jouney along the yellow brick road, filled with laughs, magic and that good time feeling. The crowd erupted at the sight of Michael Crawford and he lived upto expectation and was truly amazing. We were totally immersed in the fantasy, which is really what you want from a theatre production. The cast were all amazing and I have to loudly applaud the stage crew, the scenery was the best I have seen yet, with its moving houses and spinning yellow brick road. One true highlight was when the Wicked Witch came down from the ceiling, which was unexpected, but a perfect stunt. All in all a fabulous show, which I will be going to see again. My only negative comment is that at the end after showing admiration for Michael Crawford, only a handful of people including myself and partner made a standing ovation - what is wrong with these people!"

Thank you to the wonderful team at Good to See Theatre Breaks, we were treated to a glamorous night out to watch The Wizard of Oz. I must start off by mentioning the refurbishments they have done at the Palladium Theatre. It looks astounding inside, it's like walking onto the set of the Titanic. beautiful wooden panels, gorgeous chandeliers. It's how all theatre experiences should be like!

The musical itself, I would highly recommend everyone to watch it. I know a lot of you might say "Oh I've seen the Wizard of Oz before" but not this production you haven't. It's got heart, it's got brains and it's got courage. Andrew Lloyd Webber certainly knows how to entertain people. If the only slight criticism my guest had, was that it was maybe "too" slick. The use of the video wall technology has been taken to another level, the tornado scene is pure menace. If they added a few fans behind my seat, I would have thought I was in the middle of the tornado, it was THAT well created. The rest of the scenes were all big, bold and bright.

The music was vibrantly taken care of by conductor Danny Whitby and Sophie Evans was note perfect as Dorothy. Russell Grant doing a special 12 week stint was suitably entertaining.

All in all a fantastic evening at the theatre and highly recommended to people of all ages!