Quite rightly, St Martin’s Theatre, home of the long-running play, The Mousetrap, is London’s first West End theatre to host performances after lockdown.

The Mousetrap’s reign as the World’s longest running play has been going on for quite some time now since opening in London in 1952 and 64 years later The Mousetrap Theatre Breaks, packages with tickets and hotel accommodation are still as popular as ever and Agatha Christie is still entertaining and enthralling London audiences!

The Mousetrap briefly re-opened at the St. Martin’s Theatre before the second lockdown took place. Producers now promise that The Mousetrap will be back, and a new date to reopen will be announced soon and will be subject to government guidelines.

Producers have thanked theatregoers for their ongoing support of The Mousetrap. In the meantime, you can sign up to the official mailing list (link below) to receive the latest news.

Social distancing will be in place on stage, backstage and throughout the auditorium and public spaces.

Additional measures will also be in place to ensure the safety of guests. 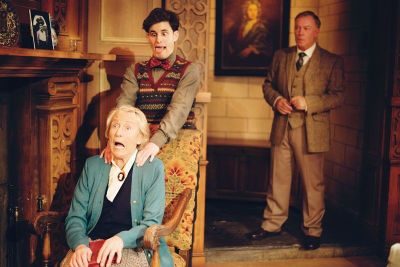 Agatha Christie’s murder- mystery is as much a “Must See” for visitors to London as the London Eye, Buckingham Palace, Trafalgar Square or the Tower of London.

The Mousetrap is set in a country house hotel run by a young couple – Mollie and Giles Ralston. During a particularly wintery night five guests arrive to find themselves snowed in with no means of anyone getting in or out. So, it comes as a surprise to all when a policeman manages to battle through the snow drifts and arrives to warn the group that a murderer is heading their way. The sudden death of one of the guests has everyone pointing fingers, but it soon becomes clear that all is not what it seems to be and that everyone is a suspect.

That The Mousetrap is still going, after so many years, is of no surprise. The quality of the writing and the acting is excellent. Whilst the cast do great homage to the Dame of Suspense they also make sure that a modern audience will enjoy the story, just as much as the original audiences, over a half a century ago.

I had the great fortune to see The Mousetrap (for the third time) recently – and no, I am not going to tell you who-dunnit – and without hesitation I can recommend the play to any London visitor. The Mousetrap is a perfect highlight to a London Theatre Break.

More information and tickets can be found at https://uk.the-mousetrap.co.uk/

Theatre : St Martin’s Theatre, West Street, London, WC2H 8DP
Genre : Play
Nearest Tube: Leicester Square on the Piccadilly and Northern lines
Opened: 25th November 1952
Booking from : 23 October 2020.
Performance times : Monday to Saturday at 1930; Tuesday 1500 & Saturday at 1600
Age suitability : For ages 8+
Theatre Tip: What I did do was eat beforehand at Jamie’s Italian just around the corner on Upper St Martin’s Lane which was a real treat although they chill the olives which dulls the taste – however, the tapanade that came with them was delicious!

The Mousetrap Gossip
It is now in its 68th year and had not missed a single performance until the Covid-19 Lockdown in 2020
It is produced by Sir Stephen Waley-Cohen who is uncle to the prolific jockey Sam Waley-Cohen.

Reviews for The Mousetrap

A recent first visit to The Mousetrap was an interesting experience.

The small cast completely threw themselves into their roles, some could say that it was perhaps a bit overacted. The theatre was a joy, a previously unexplored treasure in London.

Worth seeing if you have a few hours to spare, even if only for the fact of it being the longest running play in the West End