I consider myself very fortunate to have seen the Richard Twyman’s excellent production of Othello. Rarely does Shakespeare grip so completely as this production from Shakespeare at the Tobacco Factory and English Touring Theatre.

It is set in the round, with the audience looking down from either side of the dress circle, as well as the four side of the stalls, adding to the combative nature of the production.  The stage in the middle is a small arena, not unlike a wrestling ring, with a mic that drops down and four pillars creating the corners from which our combatants enter the fray, but the atmosphere is pure bear pit and it is Othello we are baiting.

And so Iago and Roderigo emerge from their corners, to set their plans in motion.

Oddly, read the blurb and the overriding question seems to be “What if we knew Othello was a Muslim” but it seems one of the most unnecessary questions asked in this production. Maybe it helped the cast and artistic team focus their efforts, but as far as the audience is concerned, whilst it may be interesting to get an insight into the workings of the creation of the production, and a great excuse to shoe-horn the ‘mot du jour’ into the publicity, it kind of misses the central point: that Othello is not what he cannot hide whilst Iago is what he can.

However, apart from the Fajr, the first Muslim prayer at the beginning of the play and Othello’s Misbaha which, on occasion springs to his hand, the question of his religion barely makes it off the page of the press release. This leaves us with an excellent production, of a fairly standard interpretation, of Othello: full of drive, tension and passion, fuelled by love and remorseless hate. 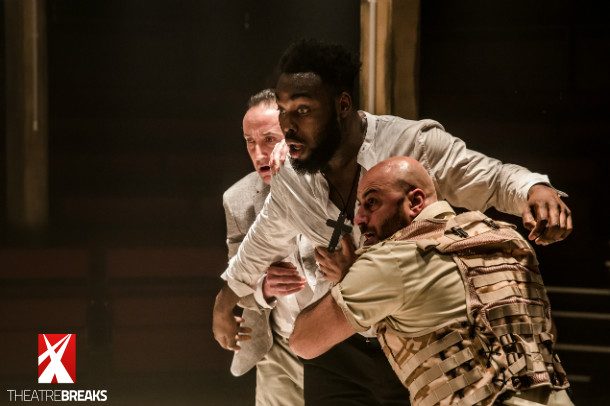 As an individual, Popoola manages well the difference between his confidence as a warrior and his naivety in dealing with any other aspect of his life. It is clear to see how he falls under the spell of those he comes into contact with: especially the magnetic Desdemona and demonic Iago.

As a couple Abraham Popoola as Othello and Norah Lopez Holden as Desdemona, are delightful to watch. Full of those things that couples do – little habits and private language, although, given the secret way in which their courtship has taken place, I did wonder at how confident they seemed in public and maybe their little confidences might have been a little less exuberant.

Having said that they play so delightfully that its almost like watching two fluffy bunnies playing in the grass… whilst the python closed in!

Mark Lockyer’s brilliant, dastardly, Iago is full of ticks and mannerisms, as he plots and schemes. Here is a man with no doubts: it is this certainty and drive that gives the production its momentum. Not happy to let events take place by themselves he is always pushing – using those around him until he has no further use for them and getting rid of them quickly.

Brian Lonsdale’s head-bobbing Roderigo, Iago’s tool and sidekick, is highly entertaining: especially as the action moves to Cyprus where he becomes an Ayia Napa-bound tourist channelling his inner Bernard Bresslaw as he attempts to blend in. 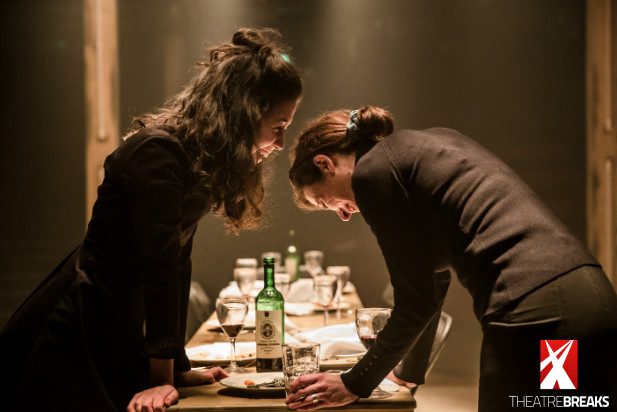 Plaudits too to Katy Stephens (as Emila) who takes us home with superb control as she finally denounces Iago.

Whether you consider Othello’s religion important or not, this finely balanced production will have you gripped. 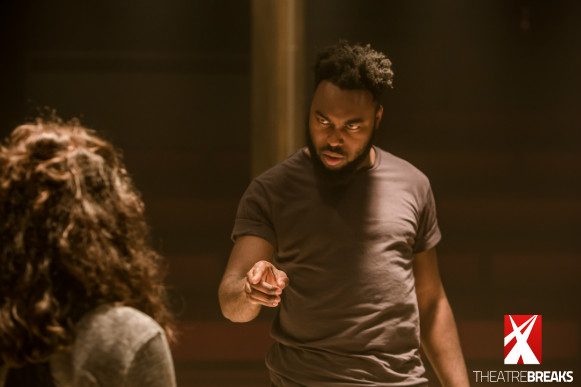