Jesus Christ Superstar is back

The return of Andrew Lloyd Webber and Tim Rice’s hit musical, Jesus Christ Superstar, at London’s Regent’s Park Open Air Theatre is, for many theatregoers, as welcome as the second coming itself!

Making the most of one of the few shows that will enjoy the tag “2020”, the Theatre Breaks gang was lucky to be at the show this week – in a safe, socially-distanced event in the open air which still had all the impact of a West End show, pre-lockdown.

It was lovely to be back. It’s been a very long time since we saw Prince of Egypt at the Dominion Theatre! 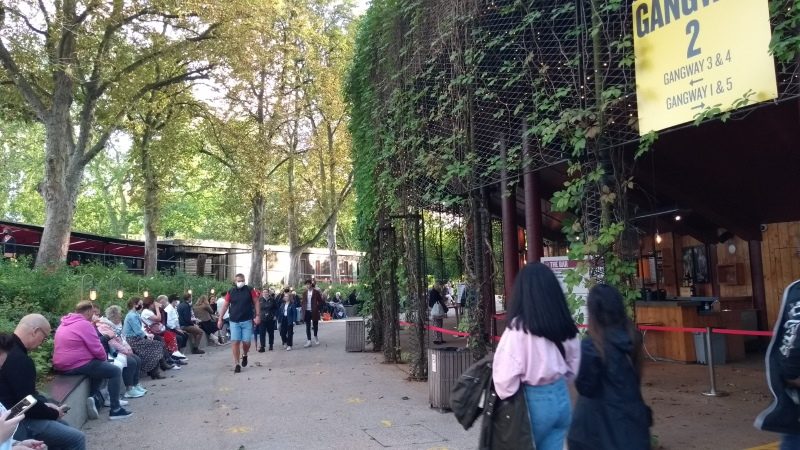 With a sold out audience of 390 in an auditorium that can hold over 1200, there weren’t even any queues for the ladies loos. The bar was open, there were food parcels and ice creams and, when we stood for the well earnt ovasion at the end, we did so knowing that we wouldn’t be blocking the veiews of anyone that may not be as enthusiastic as we were – although we needn’t have worried on that point!

40 Years ago, at the Palace Theatre London, Jesus Christ Superstar was the first West End show I remember going to.

At the end of that evening, Executive Producer, Bob Swash, took my sister and me and my mum and dad up on stage to see the mechanism, that lifted the cross, be replaced for the next performance. There was no such gadgetry here in Regents Park. Just a worn and rusty series of steps (designed by Tom Scutt after the set design for EVITA by Soutra Gilmour) allowing the multi-talented cast the space to sing and move.

This production, directed by Timothy Sheader is billed as a concert version, but with mesmerising choreography by Drew McOnie it is far more dynamic than any concert I’ve ever seen!

The individual performances were excellent all across the board. Nine shows a week, means that the big three roles (Jesus, Judas and Mary) are all double cast. Declan Bennett and Pepe Nufrio play the role of Jesus, Tyrone Huntley and Ricardo Afonso play that of Judas and Anoushka Lucas and Maimuna Memon double up as Mary.

Tickets for August performances are now sold out, but there is good availability throughout September.

Accessibility is great – you can drive there, park for free within 50 yards of your seat and, even coming from Bedfordshire, I was back home, enjoying a cheeky glass of wine whilst listening to the original concept album within 55 minutes!

Jesus Christ Superstar is the story of the last few days of Jesus Christ. It opens with Judas expressing his doubts about the direction Jesus is taking. Even as Mary Magdelene tries to sooth Jesus, he already starts to see what the immediate future will hold. A poignant tale with a shocking end, Lloyd Webber’s brilliant score adds to the tension and apprehension in the air as the show holds the audience enthalled from beginning to end.

It was this production and this show that gave me my love for theatre, so it was right and proper that it should be the first show I saw post lock-down and, as the cast removed their masks to sing, that old buzz returned. I hope we will be back seeing more soon (probably The Mousetrap in October!)

More information can be found at https://openairtheatre.com/

All the cast were distanced from each other but that didn’t stop them from coming together and creating a wonderful piece of art. During the entire show, the ensemble had sharp movements and their voices blended together beautifully. I really believed that at times they were terrorising Jesus.

At this performance Jesus was played by Declan Bennett and he was a complete
superstar and rockstar. Bennett portrayed Jesus’ pain so realistically it was hard to watch and his struggle really came through.

Tyrone Huntley played Judas and had an outstanding voice. Huntley showed Judas’ hatred for Jesus in the first half of the concert without hesitation yet nearer the end, the audience could see that Judas believed that he had done what Jesus wanted him to do. At this performance,

Mary was played by Anoushka Lucas and her love for Jesus really shone through along with her absolutely amazing vocals.

Shaq Taylor played Herod and he definitely owns “King Herod’s Song” which is so good! The way Herod mocks Jesus had me laughing and giggling in my seat. It is funny and comical and is a shed of light before the sadness that comes next.

The band was -as always- absolutely incredible

I also loved the fact that some of the cast, including Declan Bennett, played guitars on stage whilst singing. The staging was simple but with a couple of hidden crosses throughout which I thought was a really interesting touch. The raked staging worked very well as it meant the stage did not have to be massive and too far away from the audience.

Over all I thought that this production was simply incredible with an amazing cast and creative team and it is definitely one I want to see again.