A one hour, forty minute one-acter about a disorder that I had never heard of and devised by actors I had never seen, didn’t fill me with a lot of hope for the evening.

Fast forward 100 minutes and OMG! I’m a glib chap and my first rule of thumb for a good production is the difference between how long it is and how long it feels like.

Well I want to know what happened to the last 40 minutes!

Theatre company, Kandinsky’s, focused and taut telling of how an actress slowly succumbs to Functional Neurological Disorder or FND (more of which later) and its effect on her life and her relationships, is a revelation. This three-hander shows you what theatre can do when it really puts its mind to it. 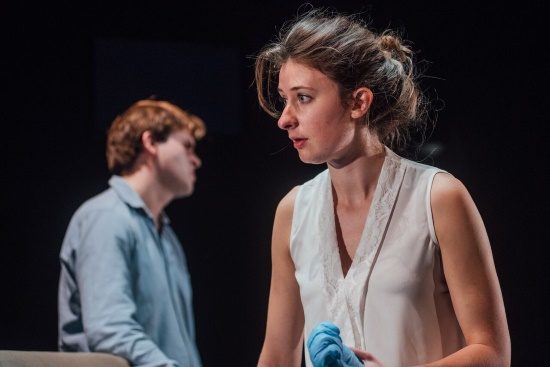 First, a superb central performance by Sophie Steer as Sophie. There are many things to recommend her performance, but the most apposite is the physical: from obliging dummy and paralysed patient, to full-on-fitting clubber, she plays the part of a woman losing physical control with such precision that the contrast really only hits home somewhere on the journey home from the theatre.

What am I talking about? OK, when an individual is described as having FND, what the doctors are saying is that something has gone wrong. The symptoms are periods of loss of control over bits of your body (eyes, limbs, movement etc), for some of the time, but doctors can be no more specific, as to the cause, than being able to say “something has gone wrong”.

The problem, Sophie discovers, is that most doctors wont even tell you that. Because Sophie is just… unlucky. Because, sometimes doctors don’t know and we don’t expect that of doctors – and nor do they!

Yes, Still Ill raises the issues of the rule of the mind over the body – but more importantly it shows how desperate we all are to fill the gaps in our lives. Fill them with facts, with hope, with anger, with Google wisdom, with anything except the acceptance that sometimes there are gaps, that sometimes we are just unlucky, that sometimes, that person, fitting on the floor of a nightclub, could be you.

The doctor tells Sophie that the good news is that it is not Parkinson’s, it is not MS, it is not epilepsy, it is not Lyme disease. But with every piece of “good” news, Sophie’s world is further pulled apart. She looks for support from her brother (played by Hamish MacDougall when he isn’t playing a host of doctors, actors, clubbers along with the third member of this excellent cast, Harriet Webb) who reacts by filling his world with anger, but ultimately, the death of their mother some years previous, has left him unable to cope with the situation.

The play keeps its momentum by never dwelling too long on the questions it raises – patient frustration, NHS short-comings, online experts, private medicine. Instead it sticks with Sophie’s journey, the development of her condition, her relationship with that condition and the change in the relationship with her brother, as she fights against what she cannot see and cannot understand.

Still Ill is remarkably complex. Academic and theatrical themes are woven in and out of the action throughout, helping to establish the plays’ own short-hand by which it manages to keep the pace going, with the help of live and recorded video and the remarkable score, played live, by Zac Gvirtzman.

Gvirtzman uses percussion, keyboard, an interesting electronic box of tricks and his own voice to accompany, lead and disrupt the action in equal measure – a virtuoso performance in its own right.

So a big congratulations to all, especially the creative team of James Yeatman, Al Smith and Lauren Mooney for an evening of cohesion and disorder, in equal measure, and for making Still Ill a compelling night out.