With great reviews and sell out shows we are lucky to have great availability for The Book of Mormon theatre breaks – with tickets to the show that the New York Times called “the best musical of this century”!

The Book Of Mormon Theatre Breaks in London

The creators of South Park have given London a musical that has been knocking them dead over on Broadway for some time now. 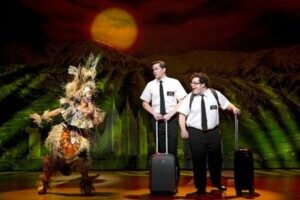 The Book of Mormon follows a pair of mismatched Mormon boys sent on a mission to a place that’s about as far from Salt Lake City as you can get: Uganda, where the local population are threatened by a brutal warlord and who have no time for organised religion of any kind!

This unlikely scenario is the basis of an hilarious lampooning of organized religion AND musical theatre that has had London theatre-goers in stitches for over three years!

I wont bore you with what the critics think, suffice it to say that reading their oevres it is more like reading the entries to a competition to provide quotes for the show’s posters… now there is an idea for a musical!

The Book of Mormon Theatre Breaks and hotels

The Book Of Mormon is on at the Prince of Wales Theatre just between Leicester Square and Piccadilly Circus. Guests on The book of Mormon Theatre Breaks could look at hotels within walking distance like the 5 star Waldorf, but as it is just between Piccadilly Circus and Leicetser Square tube stations it is easy to get to your hotel wherever you stay in London

The Book of Mormon Show File

Theatre : Prince of Wales Theatre, Coventry Street, London W1D 6AS
Genre : Musical
Performance Times: Monday to Saturday at 19:30; Wednesday and Saturday at 14:30
Nearest Tube : Piccadilly Circus on the Picadilly & Bakerloo lines
Opened: 21st March 2013
Currently booking to : 06 March 2021
Audience advice : Due to adult themes the show is suitable for ages 17 and over

The Book of Mormon was everything I thought it would be- rude, on-topic and hilarious. To say too much about it would be to spoil the show- just go see it! Unless you are easily offended of course...

Hotel was okay, could've been better service but the room did its job which is all I needed really. The show itself was wonderful, and my seat was superb! I also booked to see 3 other shows during my 2 night stay so made sure to pack it all in. All in all, an excellent trip to the capital!

Ahh, if only all West End shows spat you out at 10pm with a huge grin stretched upon your face as did The Book of Mormon last night!

The show does exactly what it says on the tin - it's rude, crude & utterly hilarious. There wasn't a stagnant point in the whole of the production and the only time I looked at my watch was when the interval seemed to happen five minutes into curtain up (in fact it was just under an hour).

The Book of Mormon is a fast paced show that doesn't let the audience draw breath from one outrageous joke to the next let alone give any of the cast a five minute sit down & re-coup.

Definitely not one for the kids - there were no apparent under 18s that I could see in the audience - and us adults rose to the occasion by giving a well-deserved standing ovation at the end.