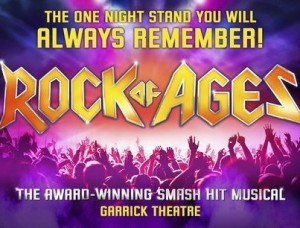 Rock of Ages, having rocked London at the Shaftesbury Theatre, moved to the Garrick Theatre on Charing Cross Road, just by Leicester Square, before closing on 02 November 2013

Rock of Ages theatre breaks are no longer available

Checkout what is now on at the Garrick Theatre

Of course if you have stumbled upon this page you have probably already decided to come to Rock of Ages – now you are just trying to work out who to bring – your leather clad mates or your leather clad significant other!  Actually you don’t have to be leather clad – but bring your crimpers at the very least!

So, let me give you a bit of the Rock of Ages story line – oh yes there has to be a story line.

“In 1987 on the Sunset Strip, a small town girl meets a big city rocker in LA’s most famous rock club and they….”

…right that is quite enough of the that!

“We Built This City” by Starship
“Nothing But a Good Time” by Poison
“Keep On Lovin’ You” by REO Speedwagon
“I Wanna Rock” by Twisted Sister
“Too Much Time on My Hands” by Styx
“Renegade” by Styx
“Oh Sherrie” by Steve Perry
“Waiting For a Girl Like You” by Foreigner
“Shadows of the Night” by Pat Benatar
“Don’t Stop Believin‘” by Journey
“Heaven” by Warrant
“The Search is Over” by Survivor
“High Enough” by Damn Yankees
“The Final Countdown” by Europe
“I Want To Know What Love Is” by Foreigner
“Here I Go Again” by Whitesnake
“To Be With You” by Mr. Big
“Every Rose Has Its Thorn” by Poison
“Can’t Fight This Feeling” by REO Speedwagon
“Wanted Dead or Alive” by Bon Jovi
“Come On Feel the Noize” by Quiet Riot
“Any Way You Want It” by Journey
“Heat of the Moment” by Asia
“Sister Christian” by Night Ranger
“More Than Words” by Extreme

And yes, I know I mis-spelt one of those song titles! And yes, Def Leppard’s Rock of Ages is not in it – weird huh?

The Rock of Ages Show File

Having moved from the “wrong” end of Shaftesbury Avenue to the heart of Theatreland just by Leicester Square, the list of nearby hotels has changed but, as it is close to Leicester Square and Charing Cross, access to most London hotels is relatively easy via the Piccadilly and Northern Underground lines.

If just a walk is what you want to get to your hotel then look for the 5 star Hampshire and 4 star Leicester Square hotels, both part of the Radisson Blu Edwardian chain of hotels. Or a great three star hotel is the St Giles just by the Dominion theatre and We Will Rock You. Otherwise the Covent Garden Travelodge is still not that far away and a great price for central London.

Fast moving, Funny and Fabulous! Set in 1987, in LA the show is packed with 80's Rock Athems. I grew up in the 80's and loved the rock music of the time and I certainly wasn't disappointed. Shane Ward and Justin Lee Collins both rocked the show, really made you want to sing a long and wow'd the audience!

Rock of Ages is filled with catchy dance-in-your-seat and sing-along songs, a truly superb cast, laugh out loud funny moments in which the fourth wall is broken down more often than not, and has a brilliant rock concert atmosphere.

As soon as the audience walks in they're greeted by loud Bon Jovi music, a set that looks like a slightly seedy yet strangely inviting bar and is graced by ads for "Live Nudes" and knickers hanging from the chandeliers, ushers that sell beers at the seats and others that hand out mini led torches with the instruction to turn them on and sway along during the ballads. The message is clear: This is not the kind of show that wants the spectator to remain motionless in their seats. On contrary, audience participation is encouraged and very much a part of what makes the experience so wonderful and different from most other shows currently running in the West End.

The musical has been criticized for not having the most ingenious plot imaginable as it centers around Drew, a wannabe rockstar who moves to LA from Michigan, and Sherrie, a wannabe actress who moves to that very same LA from Kansas. Yet, with a subplot focusing on two over the top comical German developers trying to buy the Sunset Strip and turn it into "a European model of clean, pure, efficient living", which is held back by bar-owner Dennis Dupree who doesn't want to sell the Bourbon Room and asks rockstar Stacee Jaxx to play the final gig with his band Arsenal in the club to attract the necessary money and publicity to keep it open, there certainly is plenty going on to keep the audience's attention. Combine that with a killer soundtrack filled with 80s classics and you've get yourself a fantastic rock musical.

The most brilliant move made by Chris D'Arienzo, who penned the book, is that the show doesn't take itself too seriously. The sound guy to the Bourbon Room, Lonny, also acts as the narrator and oftentimes breaks down the fourth wall by talking directly to the audience, telling characters they're in Rock of Ages and ad-libbing the hell out of his scenes until neither the audience nor the cast present on stage can keep straight faces.

Having seen bits and pieces of the Broadway show online I need to mention that the UK cast easily tops those performances (and making the need for an original London cast recording, for which there's been active campaigning in the Twitter-sphere, even more pressing). Rock of Ages isn't your average West End show and the tireless energy many of the rock-style songs demand understandably take its toll on the cast. This means that most nights several swings will be on for major roles, but don't let that put you off, because every single one does a stellar job. Cast members that stand out night after night include:

Oliver Tompsett (Drew Boley) has the best male voice currently gracing a West End stage and while "burdened" (I use the term loosely here, while undoubtedly a strain on his voice, it must also be a fantastic opportunity to be able to belt out these 80s classics each night) with performing the majority of the songs he manages to impress until the very end. In fact, the most majestic showcase of his vocal talents comes in the shape of an insanely long note during one of the final songs. As a leading man he certainly holds his own. Bonus, he's very easy on the eyes too!

Natalie Andreou (Sherrie Christian) had to, due to illness of original lead Amy Pemberton, step up to the plate very early on in previews and has since officially taken over the role. She has proven her worth by making the character her own and growing into a true leading lady these past six months.

Simon Lipkin (Lonny Barnett) is the comedic glue that holds it all together. Even if his written lines wouldn't already steal the show, Lipkin would still manage to be the indisputable star with his memorable ad-libbing scenes that form the highlight of the night.

Former X-Factor winner Shayne Ward (Stacee Jaxx) and comedian Justin Lee Collins (Dennis Dupree) are billed as the stars of the show and while neither of their roles are as big as publicity make them out to be, for unseasoned West End actors they more than hold their ground. Hopefully this means the start of a long career in musical theatre for the both of them!

With the ambiance in the theatre being that of contagious glee throughout, Rock of Ages is the most fun I've ever had at a musical. Let's hope the character of Dennis was clairvoyant when singing these altered lyrics to Don't Stop Believin' during the glitter-filled grand finale, "The musical will go on, and on and on and on", because I can certainly see this show again, and again and again and again.

I'm going to start with two thoughts... Shayne Ward is actually sexy even in a blonde wig and JLC - where were you in the 1st half?

Yes, there were definite highs and lows of last night's Rock of Ages performance.

Oh guys, I SOOOOO wanted it to be good. I wanted to give this show 5 stars. I wanted to jump up from my seat and sing every song out loud with my freebie ROA lighter waving backwards & forwards.

But there were too many "unknown" songs - well to me - maybe the American audience knew'em or those who still have leather jackets but not us musical theatre going Brits.

JLC - I wanted GOOD TIMES! However, I didn't even think it was you up there on the stage in the 1st half! We had to go ask the ice cream seller if it really was the actually mega-star himself. We were assured it was. Fortunately, you came into your own in the 2nd half and yr genious comedy came through - thank goodness!

The highlight had to be Shayne taking off his clothes lots of times. He really has got a GREAT voice (& body). Never took much notice of him in X-Factor, but I'm completely won over now.

I WANT THIS SHOW TO SUCCEED BECAUSE IT'S FAB THEATRE. My advice... cut some of the songs I didn't know, add some well known ones and strengthen the punch-lines. There are some great jokes in there... just believe that they are funny, take risks and ROCK ON FOR AGES (I hope) x