Smash hit musical, Jersey Boys is back in London. The Trafalgar Theatre on Whitehall is the home of this fascinating story about Frankie Valli and The Four Seasons.

See video highlights from the last time Jersey Boys was in London:

If the world needs anything, it is to come to London and enjoy a performance of one of the most popular shows ever to play in London’s Theatreland. See the legendary story of a group of working class boys from the wrong side of the tracks who became one of the biggest pop music phenomenons of all time! Frankie Valli and The Four Seasons. Oh What a Night!

Jersey Boys follows the rags-to-rock-to-riches tale of four blue-collar kids working their way from the streets of Newark to the heights of stardom and is the perfect highlight to a London weekend break. 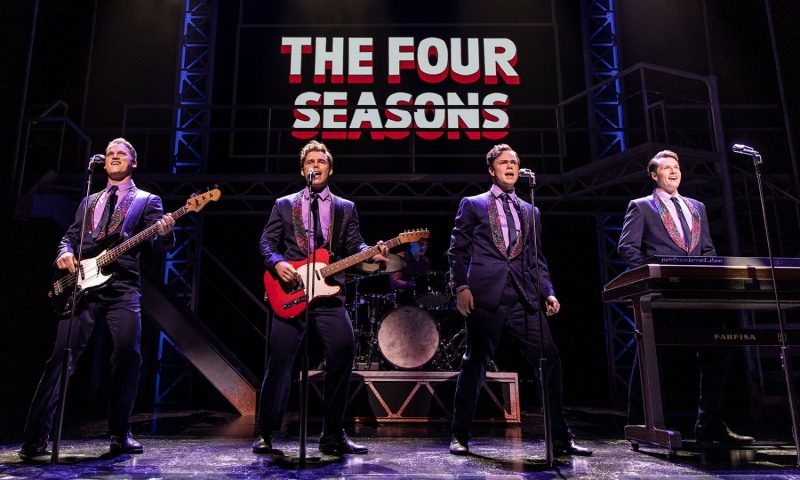 This is owed, in part, to the honestly interesting and action-packed life of the four Jersey Boys – both before, during and after their heyday – although, thanks to their music, that has never truly passed. PLUS it is also a story that not many people know, making it a rare thing indeed in the West End – a show you come out of knowing more than when you went in!

Of course, Jersey Boys’ music speaks for itself. And the quality of the performances from the four guys  is outstanding  – but I guess no more than you would expect from a smash-hit musical on the West End stage!

JERSEY BOYS at the Trafalgar Theatre is staged by the original Broadway creative team, led by the
Tony Award-winning team of director Des McAnuff and choreographer Sergio Trujillo, with scenic
design by Klara Zieglerova, costume design by Jess Goldstein, lighting by Howell Binkley, sound by
Steve Canyon Kennedy and projections design by Michael Clark. The orchestrations are by Steve
Orich and the music supervision and vocal arrangements by Ron Melrose.

The Jersey Boys is a interesting musical full of facts I never knew and terrific tracks. The actors play the parts with passion and skill. Well worth seeing

My family and I went to see The Jersey Boy's and we all loved this wonderful upbeat musical. We would all really like to go and see it again.

Teenager in the 1960's so music was of my time. Fabulous music and highly talented cast

New Jersey USA or a working class lad in the UK you did not in those day's swear in front of ladies, women or children. If you did so it was a clip around the ears. Painful but you didn't forget.

Absolutely do not be tempted to take children along.

Best show i have ever seen and i have seen a few. Looking forward to going to see it again soon. Cast are all fabulous and keep you engaged throughout the show. Muis is fantastic. Highly recommend that you book this show