Treasures of the Golden Pharaoh – Ticket and Hotel Packages

The Treasures of the Golden Pharaoh exhibition is your last chance to see the priceless artifacts, recovered from Tutankhamun’s tomb, in London, ever!

Nearly 100 years after Howard Carter went to Egypt to discover the tomb of the Golden Pharaoh, the largest collection of Egyptian bling is now at London’s Saatchi Gallery.

But why the rush?

To celebrate the 100th anniversary of Carter’s discovery, the Grand Egytian Museum in Cairo is building a new permanant exhibition to house the treasures. That means that, just like Carter, future generations will have to go to Egypt to see the riches that include King Tut’s famous Guardian Statue.

As this is the case, tickets for this must-see cultural event in London are selling very quickly.

The exhibition offers a unique glimpse into the unimaginable riches that Egypt’s kings enjoyed. More than 150 authentic objects, plucked form the King Tut’s tomb, are on display. 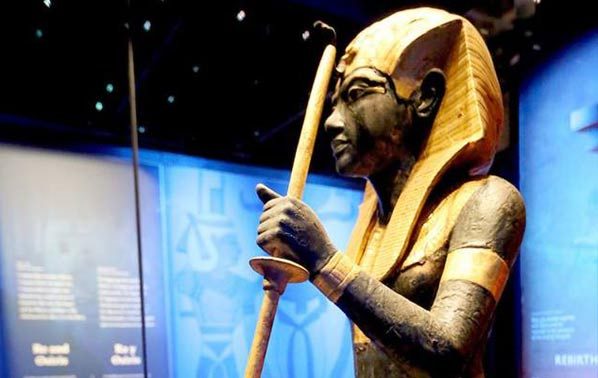 Many of the treasures are appearing outside of Egypt for the first time. So even if you have seen previous Tutankhamun exhibitions (I saw the one in 1972 along with 1.7 million other budding Egyptologists!) you are guaranteed to see something new.

Tutankhamun was a child pharaoh. When he died at the age of 18 he had ruled Egypt for 9 years. Now, you’d expect an 18 year old boy’s room to be a tad messy, especially after 3000 years. But miraculously, the tomb that Howard Carter found in 1922, contained thousands of artefacts, preserved in pristine condition!

We know him as Tutankhamun, Tutankhaten and King Tut. Son of Ahkenaten (famous for being the only Pharaoh who had a Broadway musical named after him), his mother was his father’s sister! So with a whole load of interbreeding there is no wonder that he was a very sick, very odd looking and very short lived boy!

His father had made a lot of changes in his reign, so the young king spent most of his reign being told to “correct” those changes. The priests, for example, were not impressed by the new fad of worshiping just one god! So the priests persuaded the boy Pharaoh  to put that right. He also returned the capital to Thebes.

Which all goes to show that  Tutankhamun is most famous for being discovered by Howard Carter in 1922!

The London Exhibition – What you are Coming to See

The London Exhibition is part of a worldwide tour for the artifacts which will take in 10 cities world wide. Starting in LA, it went to Paris before coming to London. Japan, Canada, Australia and South Korea will also host. 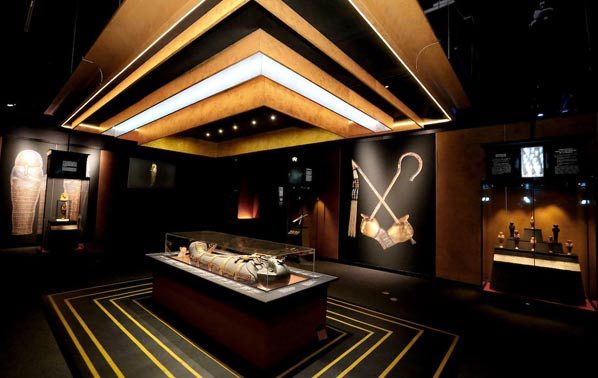 Sixty pieces have left Egypt for the first time. In the words of  Mostafa Waziry, secretary general of Egypt’s Ministry of State for Antiquities

See them, visit them, before they return back to Egypt forever!

The exhibition also delves into the science of Egyptology. It studies how we have extracted the information we have from the artfacts. Likewise it looks at how DNA testing on the mummies has given us an insight into the Royal families of Ancient Egypt.

Why is Theatre Breaks So Excited About Tutankhamun Breaks?

When the treasures from Tutankhamun’s tomb first visited the UK in 1972, 1.7 million people (including me) queued for hours at the British Museum. Then, 1997, ‘Tutankhamun And The Golden Age of the Pharaohs’ sold over 300,000 tickets before it had even opened. Now this really is our last chance to see these exhibits in London.

Where is the Tutankhamun Exhibition.

Tutankhamun: Treasures of the Golden Pharaoh is at the Saatchie Gallery in Chelsea. Getting there is quite easy – the nearest tube station is Sloane Square and it is also close to Victoria. But I suggest that you stay nearby, at one of our Chelsea hotels.

About The Saatchi Gallery

Charles Saatchi set up the Saatchi Gallery – you will remember him from the famous advertising agency. Well he did some good with his millions and has sponsored art through the collection and his own gifts.

If you are into that sort of thing, the Saatchi Gallery has showcased works by artists such as Andy Warhol, Rachel Whiteread, Lucian Freud, Damien Hirst and Jenny Saville.

The Tutankhamun Exhibition is only at the  Saatchi Gallery until May 2020. We have Tutankhamun Breaks throughout.