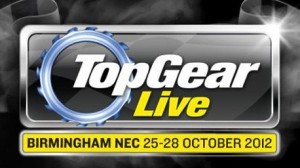 Fans of the hit BBC show Top Gear starring Jeremy Clarkson, James May and Richard Hammond will be overjoyed to hear that this Marmite-like phenomenon is going to the Birmingham NEC in Top Gear Live: an adrenaline-fuelled stage show from 25 to 28 October. OK it is not our usual London Theatre Breaks type show but I think it will be great fun nonetheless!

Join the three presenters in the live action arena as they bicker their way through car reviews, track tests and even drive a mobile version of the Top Gear TV set.

Live action will be taking place all around the Arena and track with celebrities testing their skills against each other in Top Gear’s Reasonably Priced Car, and professional drivers demonstrating their abilities in some of the Top Gear cars.

The show will also feature the Top Gear stunt team who will be demonstrating some awe inspiring displays. Of course any Top Gear show would not be complete without the infamous tamed racing driver Stig and Top Gear Live will give him (or her) a turn on the track performing some superb power laps.

The exhibition features a replica of the Top Gear TV studio where you can have a go at presenting, have your say over what goes where on the giant Cool Wall and watch some of the best Top Gear challenges in the TV show’s history.

The exhibition centre will also feature an array of dazzling cars from some of the world’s top manufacturers alongside some of the not so grand Top Gear cars.

Tickets to Top Gear Live also include entry to the exhibitions – doors open at 10:00 so our accommodation packages includes accommodation the night before the show. You can add extra nights using the online booking system – see below – but if you want to stay the night of the show instead then please call our reservations team on +44 (0)1904 420452

Platinum packages really are THE Top Gear Live experience: Obviously you get brilliant “premium” seats  for the live track and arena show and, like the Gold Package below, you get a behind the scenes of Top Gear Live tour, TGL branded lanyard and laminate, Top Gear Book, access to the exhibition plus official showguide. But unlike any of the other packages you also get an Arena Paddock Tour and access to ‘Stig’s Lounge’.

Gold packages include reserved enhanced seats in the live track and arena show, behind the scenes of Top Gear Live tour, TGL branded lanyard and laminate, Top Gear Book, access to the exhibition plus official showguide.