The We Plays are two entertaining and at times harrowing, but ultimately hopeful, monologues written by Andrew Maddock.

The evening sets off at an absolutely breathtaking pace. As the audience find their seats, they are treated to the spectacle of John Seaward as “Me”, centre stage, with a huge suitcase strapped to his back, (also trapping his arms by his sides), furiously gyrating to club music. He is single, package-holiday man, off to Cyprus to re-create the hedonistic weeks of clubbing, drinking and poolside lechery of his youth. 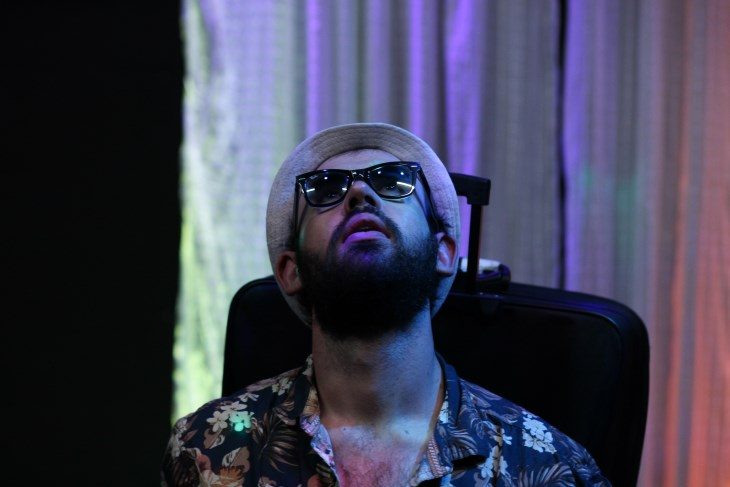 The lights change, the suitcase strapped to his back becomes the budget airline seat he is trapped in and he opens with a tirade, about flight delays and his fellow passengers, with the same manic energy with which he dances.

He has everything planned out, from airport transfers to seaside views. Nothing is going to stop him getting his perfect Cyprus sunset and the audience are carried away by this tidal wave of enthusiasm.

So night after night goes by, but his well laid plans come to nothing. A note of desperation creeps into his actions and the atmosphere starts to change.

Maddock has crafted a roller-coaster ride for his audience and throughout the piece, just as we think we have a grip on proceedings, the evening veers off on another, altogether unexpected direction. So even as we start to hope that his plans are successful, we discover things are not what they seem.

Every syllable of Maddock’s script rattles out with superb, rhyming, urgency yet, when changes in pace do come, they are handled with fine control and Seaward’s energetic, yet focused, performance, is a tour-de-force, maintaining the energy throughout.

The second half of the evening offers us similar fayre. Fast talking “Pru” (played by Jennifer O’Niell) is giving us the benefit of her wisdom from her tartan clad throne.

Swigs of Irn Bru and helpful tips from Michelle Mone, punctuate her story as we get an insight into her life and her Glasgow as she negotiates the brickbats life throws at her.

But, like the central character of the first half, Pru’s story is not as we would first think and we soon start to see that the bravado is hiding a shocking truth.

With two such similar pieces it is hard not to draw comparisons and, whereas director of Cyprus Sunsets, Phil Croft, succeeds in creating the dynamics that enhance the natural rhythms of the piece, the changes of pace, in Irn Pru, are not managed so well, giving it a more uneven feel that is not helped by the interruptions of rather poorly recorded snippets of wisdom from Michelle Morn.

That said the two monologues sit well together and the two, very different, protagonists with two very different stories to tell, create a thrilling evening of discovery.

The We Plays, by Andrew Maddock, is on at the Hope Theatre Islington until 15 October 2016
Directors: PHIL CROFT & ASHLEY WINTER
Actors:
Me in Cyprus Sunsets played by John Seaward
Pru in Irn Pru played by Jennifer O’Neill
Box Office 0333 666 3366
http://www.thehopetheatre.com