Wouldn’t you just know that the press night for La Bohème at the King’s Head Theatre happens to coincide with London’s hottest day in September since Giacomo Puccini himself was alive!

So Mark and Ralph’s freezing bedsit was anything but, with the audience, at least,  becoming more dishelved as the night went on! At least we were only 124 bodies: just think what it must have been like in the 2000+ houses of the West End?

Enough of that (for the moment): I should really start by talking about what the company could control: the wonderful production.

This is a cut-down, 4-hander, 100-minutes-including-interval, modern-language, piano-and-cello, La Bohème. Set in flats somewhere in London, E1, the “Cat and Mutton” in Hackney and then, later, in a flat above the King’s Head itself. The completely new libretto by King’s Head Artistic Director, Adam Spreadbury-Maher and Becca Marriott is solidly set in a 2016 that we would all recognise. Mimi works in a call centre in Euston and Musetta (real name Maureen) finances her lifestyle by attracting bald guys in Porsches – “he was at school with Prince Harry!” 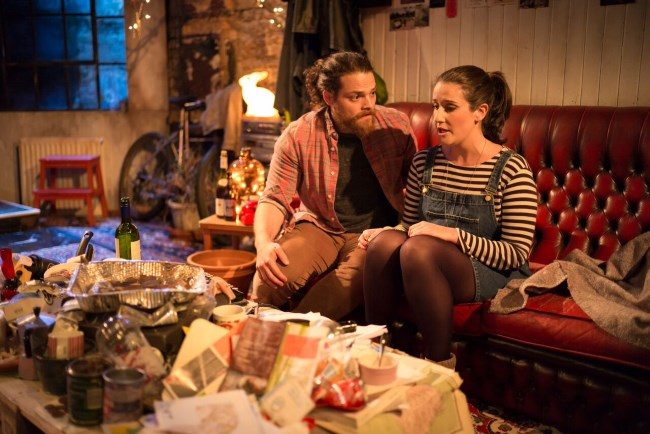 All that is left from the original is Puccini’s beautiful music and the story of four friends. And that is all you really need! The new libretto loses the poetic but gains on the dramatic. But the music! Everything is there: the tripping themes, the soaring melodies, the angst and anguish and the voices. All in a small back room in Islington!

The girls’ voices are sublime. Stephanie Edwards, as Mimi, offers us the vocal highlights that bring tears to your eyes whilst remembering them and Caroline Kennedy’s performance, as Musetta, gives a superb balance to the production, with wonderfully comic moments, mainly involving the men of the audience, followed by glimpses of touching self-knowledge and worldly wisdom, all hidden behind her brash and brazen exterior.

Roberto Abate’s (Ralph) voice lacked, the smooth quality of Thomas Isherwood’s (Mark) especially higher up the register, but it gave him a desperate core absolutely right for the jealous lover and the [SPOILER ALERT] heartbroken man left holding Mimi’s drug-wracked body at the end, as he cries her name in a futile attempt to call her back from the dead.

For me the libretto, traditionally approached, has always been the stumbling-block to becoming totally “at one” with grand opera (unless I have done almost as much work as the soloists in understanding the piece). There was no such barrier here and whilst some of the modern language jarred slightly, I was more than happy to pay that price to be so completely engrossed and overcome by the production.

Another highlight: the quartet in act 3: oh “sweet awakening”! Just one small favour! Ah! Sublime: heartbreaking! As Mimi and Ralph cling to the promise/lie of an end to loneliness and of Mimi being “clean” by the time the spring blossoms fall, Mark and Musetta’s relationship descends into name calling and vitriol.

A couple of niggles though.

OK, I know it was hot but, a cast, complaining of the freezing cold, in rolled up shirt sleeves, was not a good visual opening. The lighting and set didn’t help either, both using a very warm palate (although I saw some “cooler” production shots which makes me think maybe something was not quite right on the night).

Also the positioning of the table made access to the sofa problematic throughout the production. Anyone approaching the sofa, or someone sitting on it, seemed to worry more about the table and its clutter than the reason they were heading that way!

And lastly, even though I thought Musical Director, Panaretos Kyriatzidis, did exceedingly well in getting Puccini’s wonderful themes and melodies across with the limited resources of cello and piano under his “baton”, the double act didn’t quite reach the heights that might have been possible. It has to go down as an opportunity missed, rather than an outright criticism, but I’m a sucker for a cello and some big, sweeping bow strokes, from it’s beautiful, intense, middle register, would have ripped the very heart out of us!

But none of that really matters.

Recently, whenever I have seen La Bohème I have been reminded of the rather tepid modernisation of it that came to the West End in the form of Rent. Thanks to the King’s Head Theatre I will never have that problem again. 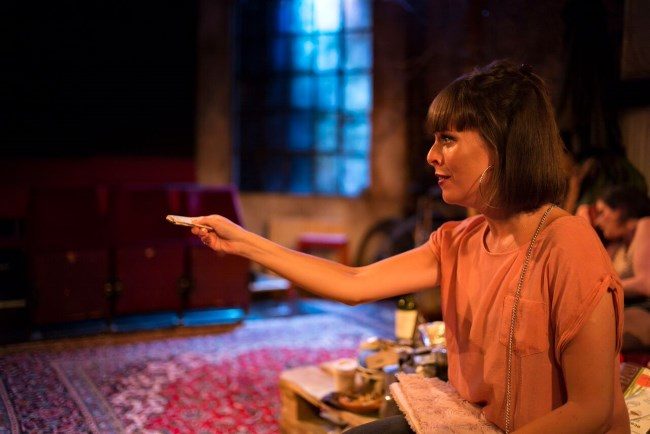 To say “I loved it”, would not be an under-statement. It’s not often grand opera starts the tears flowing – a melancholic refrain might bring a lump to my throat, but it’s rare that I am so involved with the plight of the main protagonists that I’m moved to actual tears! Hard hearted? Well obviously not! Congratulations to everyone involved.

Accessible is the watchword here, so, if you are thinking of trying opera for the first time I would strongly suggest you do so with this production. The language, at times is rather ripe so unfortunately I can’t recommend it to families with younger children, but if you have teenagers who have grown up on a West End diet and they are ready to try something a bit more sophisticated, the answer is right here at the King’s Head.

Can’t wait for Madame Butterfly in 2017!

With a special gala performance on 21 September 2016