Rip It Up Theatre Breaks

Starring Aston Merrygold, Jay McGuinness, Harry Judd and Louis Smith Rip It Up theatre breaks recreate the sights and sounds of the 60s at London’s Garrick Theatre in 2019. 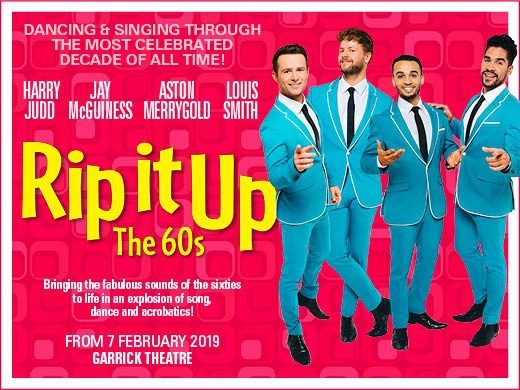 Featuring hits from Elvis Presley, The Beatles, Bob Dylan, The Rolling Stones and Aretha Franklin to name but a few, Rip It Up combines song, dance, acrobatics and spectacular visuals to bring the 60s vividly to life.

Running from 07 February to June 02 2019, Rip It Up stars Aston Merrygold from JLS, Jay McGuinness from The Wanted, Harry Judd from McFly and Olympic champion Louis Smith, with a supporting cast of incredible dancers, singers and musicians.

Not only will audiences get to enjoy a soundtrack of a generation, created by artists such as  The Beatles, The Who,  The Rolling Stones, Dusty Springfield, Burt Bacharach, Elvis Presley, Bob Dylan, The Byrds, The Doors, Aretha Franklin, James Brown Marvin Gaye, The Mamas & The Papas, Stevie Wonder, The Beach Boys, The Supremes and many more, the show also celebrates the special events that made the 60’s one of the most important cultural decades.