SOHO by Stufish at the Peacock Theatre, London

Dance meets circus meets acrobats meets gymnastics: Soho is a spectacular cross-over-fest, a banquet for the eyes, a lavish celebratory repast for the emotions. 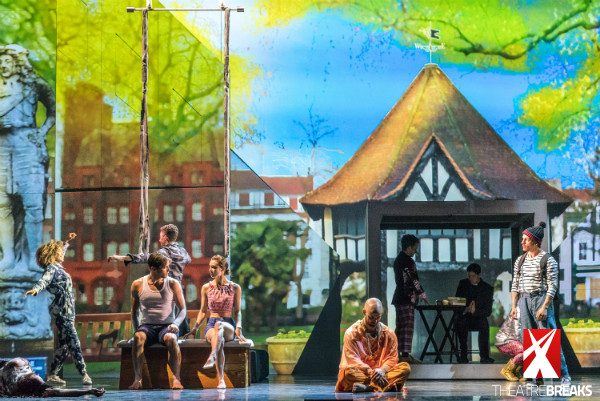 We encounter a lonely, wander-lost Buster Keaton figure who rocks up in the vibrant playground that is the eclectic area of central London known and loved as Soho: here he embarks upon an Odysseus-like voyage through the mesmerising pleasure-dome of day-life, work-life, night-life, play-life, food-life and, with a certain symbiotic inevitability, sex-life. In Soho, it doesn’t matter if you are gay, straight, bi, trans, fluid or gender-neutral, you can still dangle on the end of ropes, climb Chinese poles, swing and swizzle in aerial hoops, flit about on trapezes, cavort on aerial straps, dabble in MMA and always come back down to earth with cat-like stealth and poise.

That is if you have the skill. And the skills on display in this show will smack you in the gob, knock your socks off, energise your body and blow your mind. This is a rip-roaring, spine-tingling, titillating dance through a life less ordinary, in a place less homogenised with people less typical. Soho shows us Soho in all its wondrous glory and anyone who has not experienced that den of delight and decadence before seeing this show will move it straight to the top of their bucket-list.

Lost Man encounters the Tube, the rush-hour, those diverse streets with their centuries-developed cultural mix, advertised through shop windows, enticing signs and tempting foods. He visits gyms and bath houses and town-houses and tower blocks. He rests in the cool tranquility of the square with its hut and its pigeons. He ranges through China town, the Colony Rooms and what is for me the epitome of Soho, Madam Jojo’s, that joyous little jewell in the crown of cabaret, burlesque and live music, sadly closed in 2014. And from this inspiring journey Lost Man comes to understand an enduring truth: Soho isn’t just a place you can visit: it’s a state of mind. Take it with you wherever you go.

Director Abigail Yeates has assembled a marvellous crew of twelve all-action, treble-jointed, super-heroes who each possess an off-the-scale malleability-factor and who, under the guidance of choreographer Eleni Edipidi, create a mirage of harmonious movement that delights the eye and vitalises the senses. Peter Coyte’s music provides an effective mix of original compositions with a range of standards that help create the vibrant mood of Soho life and Richard Godin’s Lighting, supported by White Light, combines soft-touch nuance with brash in-yer-face colour and effects that complement the action and set tone and feel. The extraordinarily ambitious project is enabled via Stufish (cf Pink Floyd Exhibition at the V & A) whose production design completely gets the street-vibe and delivers the permeating culture-shock with precision and creative depth. If ever an example was needed of ultimate artistic teamwork then this is it: Soho is peak collaboration. 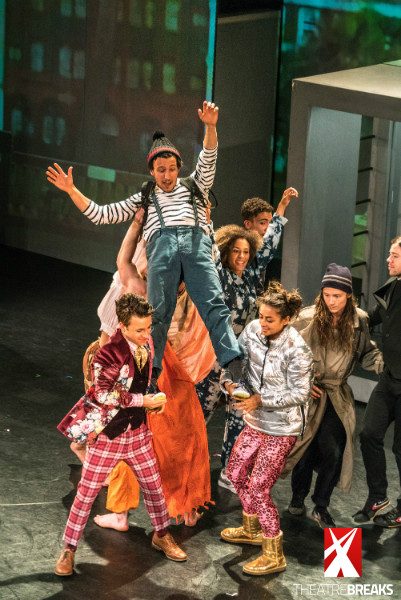 It would be invidious to mention individual performers out of this international company of twelve as all equally play their part and the troupe is an organic entity that is truly greater than the sum of its parts. Soho is a genuinely holistic show that is an antidote to the drudgery of daily life, elections and (whisper it softly) Brexit: that antidote is joy.