The Pink Floyd Exhibition Their Mortal Remains @ The V & A.

Do you seek a mystic high? Maybe, because you misheard a lyric? You might well discover the Truth, therefore, at the Victoria and Albert Museum – the V & A – where a scintillating and deeply fascinating Pink Floyd exhibition is being staged. Called “Their Mortal Remains”, the show – for such it is rather than mere exhibition – kicks off in a double-size replica of the Bedford van in which the prog-rock band started touring back in the ’sixties. 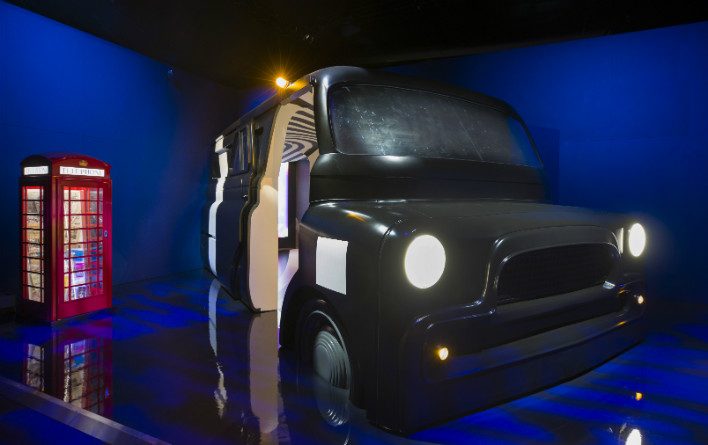 Thus the visitor begins a unique kinetic voyage through the various important benchmarks in Floyd’s career. This Stufish designed inter-active exhibition provides the participant with a personal headset through which the commentary/music/interview soundscape changes, as if by magic, as each individual room is entered, each new location is experienced. This audio guide system completely customises the experience, allowing each person to move through at their own pace without need for rewinds or fast-forwards, enabling them to skip/stop/return at will. Thus the visitor is provided with a unique, personalised glimpse of the milestones that mark the various staging posts of this illuminating adventure, along with the music that underscores and identifies the different Pink Floyd eras. 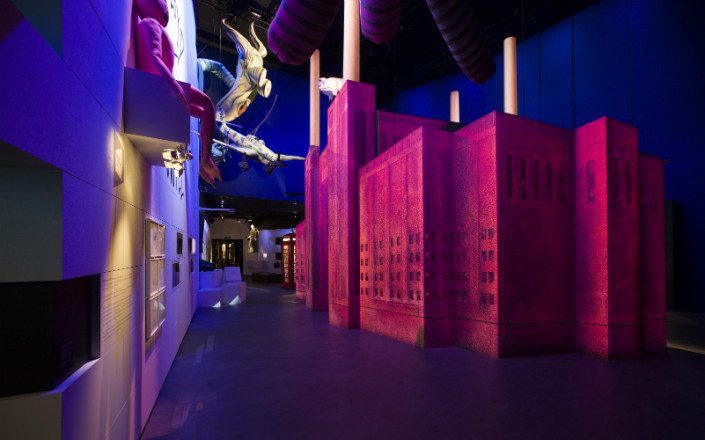 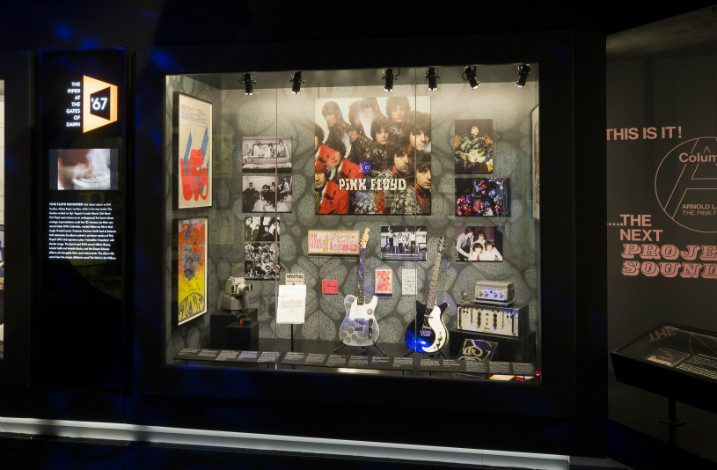 Having been greeted by the leviathan-esque mixing desk that was used to master “The Dark Side Of The Moon” album we progress to the Musicology room which contains bays with over fifty of Floyd’s instruments. Apparently the huge panes of glass that front the cabinets had to be installed by robots – which conjures up a very Floydian image when taken with all the other striking visuals that we are presented with. The iconic album cover designs are the work of Hipgnosis, a name coined by original founder of the band, Syd Barrett (the band’s former name was Syd’s Pink Floyd), who shared a flat with Storm Thorgerson and Aubrey Powell, founders of Hipgnosis, who became legendary figures in the world of album cover design.

Here, the Hipgnosis designed cover for “Animals”, with a blow-up pig flying high above Battersea Power Station, is presented in a huge 3d installation of that iconic building and as we wonder at its scale our audio guide recounts the story of the shoot for the cover and how the giant inflatable pig “escaped”. Very amusing!

And for the legendary “The Wall” album we have a nine metres high inflatable Gerald Scarfe-designed teacher as well as live footage of the final “The Wall” concert and we witness how Roger Waters used this epic musical concept to mark the destruction of the Berlin Wall. 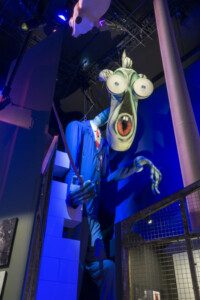 Besides the sound – and the Sennheiser clarity is peak precision – there is the formidable mix of lighting visuals – strobe effects, lasers, moving lights pin-spots, gobos and state-of-the-art LED’s – which recreate the atmospheric ambience that surrounded the psychedelic pop group of the sixties through to the portrayal of the essential spirit of the band that produced multi-platinum-selling albums in the seventies and eighties up to the present day. The lighting – ranging from the subtle to the flamboyant – is key to the exhibition/show: the enticing optical concept is by Woodroffe Basset Design with equipment supplied by White Light.

The classic Floyd line-up of Roger Waters, David Gilmour, Nick Mason and the late Richard Wright are always on video-hand to recount their stories, comment on the band’s development and give us perceptive insights into the creative process and composition of songs. In particular, once again through our trusty audio guide, we learn about the classic track “Wish You Were Here” from the album of the same name. We hear – and see – both Waters and Gilmour discussing the song’s genesis though they are not together in the same room. The film cuts between the two and there seems to be a gentle appreciation and slightly reluctant admiration of each other’s contribution to what has become a quintessential song: an example, perhaps, of how the dramatic fall-out of these two great musician-songwriters still pervades their work and their response to it. There have been reunion concerts, of course, and the enduring quality of their back catalogue speaks for itself but its interesting to note how bands develop, grow, achieve greatness, fall out and then fracture. For that, as well as viewing the spectacular set-piece staging, the ground-breaking musicianship and cutting edge concepts, mark out this exhibition as a must-see for the whole Pink Floyd fandom as well as any one else who has even a passing curiosity in the music scene of the last fifty years.

So – well done Stufish – Entertainment Architects: have a cigar!