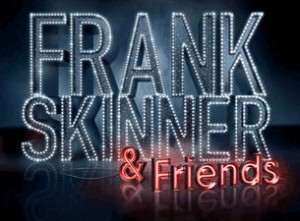 Theatre Breaks  are available now for Frank Skinner and Friends – a night of comedy, cabaret and music all on one bill in London’s West End and brought to you by multi-award winning comedian FRANK SKINNER.

Each night will feature four different acts. Expect everything from top comedy to swing bands, beatboxing, opera, juggling, and even a little bit of magic, all compered by host FRANK SKINNER.

The  theatre playing host to the show is the Noel Coward Theatre on St Martin’s Lane.

There are several hotels nearby – the Strand Palace Hotel, The Guoman Charing Cross, The Savoy (if you are feeling flush!). But Leicester Square tube station is just around the corner. It is on the Northern Line and the Piccadilly Line so you can get to the theatre very easily wherever your hotel is located.  Packages start from around £60 per person for ticket and accommodation, so not only will the evening be excellent fun, but it won’t break the bank (unless you go to the afore mentioned Savoy Hotel of course.

Not too sure how long availability will last so the advice is, if you fancy a Frank Skinner Theatre Break book now!