Ken Stott & Reece Shearsmith star in The Dresser Theatre Breaks are no longer available to book. See what’s on next at the Duke of York’s theatre

Sean Foley, who recently directed Kenneth Branagh & Rob Brydon in The Painkiller, will be at the helm of the revival of the 1980 play The Dresser written by Sir Ronald Harewood based on his own experiences as a dresser for Shakespearian actor Sir Donald Wolfit. 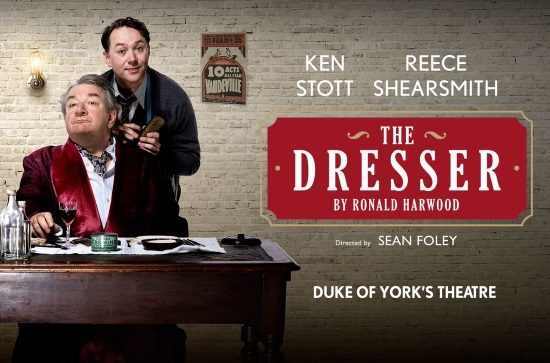 TV audiences will be familiar with Scottish Olivier award winning actor Stott as the face of ITV’s DI John Rebus and also more recently he starred with James Nesbit in the 2014 BBC series The Missing.
And unless you’ve been hiding in a dark cave for the past 10 years, Reece Shearsmith will be instantly recognisable for TV comedy shows such as The League of Gentlemen, Psychoville and Inside No. 9. He’s also cut his teeth on the London stage starring in Betty Blue Eyes, Ghost Stories and The Producers.

In a play both hilarious and poignant, Stott and Shearsmith will play an ageing actor, Sir, and his dresser, Norman, who, with Sir’s confidence at a low rouse another great performance from him.The Dresser explores the relationship between two men who are reluctantly and inevitably co-dependent.