“Please don’t be charmed, he’s not a lovable rogue…” 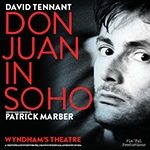 Following the final adventures of its debauched protagonist – a cruel seducer who lives only for pleasure – Don Juan in Soho is savagely funny and filthy. The play is now on at the Wyndham’s Theatre until 10 June 2017

IMPORTANT: Not recommended for anyone under the age of 16 as this show features explicit language and sexual content.