As soon as I arrived outside the Palace Theatre I realised that something different was happening. It was not just the neon signs and the men in suits, but the camera crews and the hushed conversations as people walked past and commented:

“That Harry Potter play is here”

“It’s opening tonight, that is why everyone is here”

“Is it a musical? they usually have musicals here: I saw Les Mis here!”

“Oooh Look at them, they are all dressed up!”

The area was crawling with young adults of a certain age. I am sure younger children would have loved to come and see it but, “mummy doesn’t give me THAT sort of pocket money! And besides, I’m saving up for a pony!” and the older generation, the more usual London theatregoer, couldn’t work the internet quick enough to get tickets!

These are the adults that hopefully dashed home to use those computer skills to sign up for the referendum later in the month. 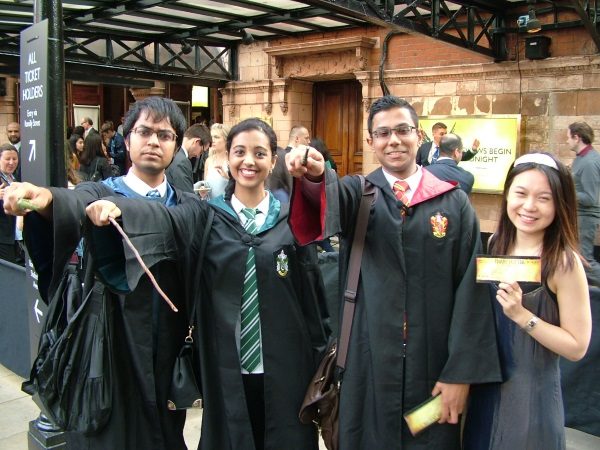 Their costumes looked well and truly in place in front of the grand, red-brick, Victorian facade of the Palace Theatre.

Unfortunately I wasn’t lucky enough to get a ticket for the Cursed Child, so all I did was walk past soaking up the atmosphere – sorry!

What I was lucky enough to see last night was a preview of Disney’s Aladdin next door at the Prince Edward Theatre.

Tickets for this are much easier to come by, but there is no doubt that it will become just as popular given time. With a show setaling performance from the Genie and lots of laughs and huge song and dance numbers provided along the way, I can’t wait until I am able to give you a review of the show (Disney has forbade me to do so before 10pm on 15th June).

What I can tell you about is what I did during the interval.

Not wanting to spend vast sums of money on ice cream I walked along the road to the news agent and bought a magnum for £1.99. I then walked across the road, carefully avoiding the cyclists, where there was a display on the building opposite telling me all about the history of Soho – did you know that it was once a famous hub for violin makers?

Even though the rest of the country was suffering from flashfloods, London’s Theatreland kept dry and warm. So it was a pleasant stroll we enjoyed after the showback to the tube station.

I wasn’t lucky enough to be on a theatre break, so no posh hotel for me, although I did pass the Savoy Hotel earlier, on the way to the Dior shop in Covent Garden (I know!), where I spent a few moments wondering what it would be like to stay there!

What ever you plan to do in London – it’s always worth setting aside a little time to wander about, dream, maybe take a few photos, chat to random strangers, buy an ice cream!

London is such a magical city, even without the magic spilling over from Aladdin and Harry Potter.

Actually “magic” is becoming quite a theme in London’s Theatreland. Can you name the other shows currently in town with a magical twist?