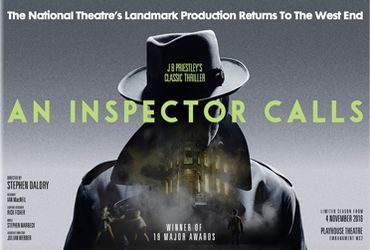 Director Stephen Daldry, well known for his award winning films Billy Elliot and The Reader, brought his eagerly anticipated version of the play to the Playhouse Theatre and its proved an outstanding hit.

This production of An Inspector Calls has won a total of four Tony Awards and three Oliviers since its inception in 1992 and will celebrate the 25th anniversary of its first staging at the National Theatre during its run to March 2017.

A haunting thriller, an Inspector calls unexpectedly during dinner at the wealthy Birling family home. Having toasted their daughter’s engagement the Birling’s celebratory mood is shattered as the inspector conducts his investigation into the death of a young woman.