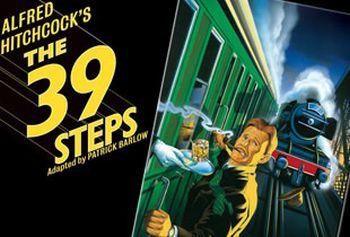 The 1935 Hitchcock film classic of John Buchan’s thrilling novel The 39 Steps was not a low budget movie with locations in the Scottish glens, the Flying Scotsman, the Fourth Bridge AND the London Palladium.

So how do you squeeze all of that, and a cast of over 100 into the rather wee Criterion theatre, London?

With Patrick Barlow’s brilliant stage adaptaion – that is how!

Four cast members, a breathtaking amount of quick changes and an imaginative staging enables this hilarious farce to bring every scene of John Buchan’s thriller to this humble West End stage under Maria Aitken directorial power.

If you read the papers, this is what yours said about The 39 Steps:

“A fast-paced, resourceful and attractively tongue-in-cheek production by Maria Aitken” The Independent

“This clever and witty … All in all, thoroughly ripping.” The Sunday Times

“This 39 Steps is part spoof-spook and part dead-pan clowning.” The Observer

“A joyful version of The Thirty-Nine Steps” The Sunday Telegraph

Now you just have to see for yourself… don’t forget to book the hotel and travel at the same time!

39 Steps was very clever and simple, no special effects but still very impressive.

Enjoyable though more so if know the film. Quite OTT and tongue in cheek.

No complaints from people who I went with, so maybe I was not in the right humour on the evening!