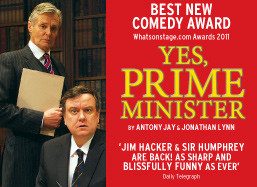 Our favourite PM and our favourite Cabinet Secretary: Jim Hacker and Sir Humphrey Appleton returned to London for some more parliamentary perciflage  in Yes Prime Minister, the stage adaptation of the hit comedy TV series.

The award winning comedy Yes, Prime Minister can be seen at the Trafalgar Studios Theatre on Whitehall – a very apt venue for the show.

The stage version is written by the same team that brought both Yes, Pime Minister and its predecessor Yes, Minister to the nations TV screens: Jonathan Lynn and Antony Jay. This production has been written especially for the show’s anniversary.

For those of you who don’t know, Yes, Prime Minister the play follows the story of British PM Jim Hacker and Cabinet Secretary Sir Humphrey Appleby. The country is facing a financial meltdown and their only hope for salvation lies with throwing their lot in with some morally dubious allies, which leads to comic consequences.

In London, Michael Simkins will play the role of Sir Humphrey Appleby and Robert Daws will play Prime Minister Jim Hacker although as always, cast members cannot be guaranteed for every performance!