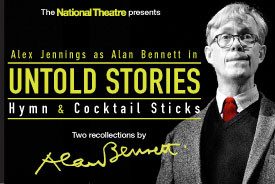 The National Theatre’s critically-acclaimed double bill, Untold Stories, transfered to the Duchess Theatre for a short season of theatre breaks from March 22 2013.

Untold Stories Theatre Breaks are no longer available. Check here to find out what is now on at the Duchess Theatre.

Hotels near the Duchess Theatre

The Duchesss Theatre is down by the Aldwych end of the Strand. The 3 star Travelodge Covent Garden is just the other side of Covent Garden and the 4 star Strand Palace Hotel is just round the corner on the Strand. For 5 star choices you can’y go far wrong with the Savoy itself! Nearest tube is Covent Garden but itr can get a bit manic at the end of the evening… walk along to Charing Cross, or up to Holborn for a slightly more relaxed time of it rather than battling with the lifts if you are thinking of staying outside of the West End.