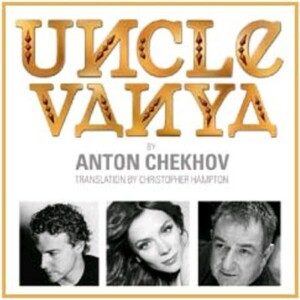 Now forgive me for my ignorance but I didn’t realise that Uncle Vanya was a comedy let alone “an hilarious one”! It doesn’t sound like a comedy and Chekhov is not well known for his sense of humour, but maybe it is Christopher Hampton’s adaptation that we have to thank for the jokes! Whichever it is I would like to thank the production  company for bringing together the cast which includes Ken Stott as Vanya, Samuel West as Astrov and Anna Friel as Yelena!

Uncle Vanya has now closed. Check what Theatre Breaks are now available at the Vaudeville Theatre.

One of Anton Chekhov’s undisputed masterpieces, Uncle Vanya follows the visit of Professor Serebryakov and his young wife (Friel) to the rural estate that supports their urban lifestyle. Once there the estate manager, Vanya, and local Dr Astrov promptly fall for the Professor’s young wife, but things are truly brought to a head when the Professor announces he is to sell the estate!

Uncle Vanya has opened at the Vaudeville Theatre to rave reviews:

It is playing until 6 February 2013 and it is directed by Lindsay Posner with designs by Christopher Oram.

The cast in love with the past, with ideals and with each other are:

Ken Stott: Best known for his TV roles (John Rebus, Pat Chappel in The Vice) he is certainly no stranger to the stage. He will also be in the up-comming Hobbit movies.

Anna Friel: After rising to fame in TV Soap Brookside, Friel made her West End debut in 2001. Her last appearance in London’s West End was in Breakfast at Tiffany’s in September 2009.

Samuel West:  is an actor/director perhaps best known for his role in the Merchant Ivory film Howards End. Again he is a regular in London’s West End having starred in Betrayal and ENRON amongst others.

The Vaudeville Theatre is on the Strand, just next to the Adelphi Theatre. The Strand Palace Hotel is the closest hotel and is an excellent base right in the heart of Theatreland. Opposite is the wonderful 5 star Savoy Hotel. Recently refurbished it really is a beautiful place to stay – on a special occasion. The Radisson Edwardian Hampshire is also handy as is the Corinthia Hotel just the other side of Charing Cross.

Talking of stations, access is easy with Covent Garden, Charing Cross and Embankment Tube stations all being a short walk away – even Leicester Square isn’t too far and their are bus stops right outside too, so the theatre is rather spoilt when it comes to access to the rest of London!

London Theatre Breaks Prices start at £112 per person including best seats for Uncle Vanya, bed and breakfast, service and VAT at 20%