Following a run of superb opera productions at the Kings Head Theatre in Islington, a new version of Tosca, the third opera production at the venue this year, following original retellings of Madam Butterfly and The Magic Flute, is bought to us by several members of the creative team from my personal favourite, 2016’s La bohème. 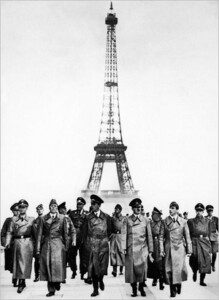 Paris. August, 1944. As the Second World War rages on, lovers Tosca and Cavaradossi give refuge to a political prisoner and find themselves ensnared in the machinations of the tyrannical head of the Paris Gestapo, Scarpia. As Charles De Gaulle’s liberation movement advances and US troops tighten their net around the Nazi occupiers, everything Tosca holds dear is about to be torn apart.

A searing thriller of power and passion, this modern retelling takes the timeless tale and reimagines it at the heart of the twentieth century’s defining conflict – all set to Puccini’s powerful score

What nailed La Bohéme for me was the new libretto, in 21st century English, by Becca Marriott and Adam Spreadbury-Maher, so imagine my joy at hearing the same team are getting together to give us a new libretto to help bring this Puccini score to life for 21st century ears.

Adam Spreadbury-Maher will Director whilst Panaretos Kyriatzidis is in charge of the aural feast and designer Becky-Dee Trevenen will delight our eyes.

Adam Spreadbury-Maher, Artistic Director of the King’s Head Theatre, says “‘I’ve always wanted to play out Tosca against the epic, romantic and devastating backdrop of Paris in the Second World War. It’s the ultimate ideological conflict, and a pertinent setting for Puccini’s masterpiece. It’s fantastic to be working with the team from La bohème on this brand-new production. We’re going all out for our final opera of 2017 with this dazzling period piece, which I hope will be captivating, provocative and unexpected to seasoned opera veterans and newcomers alike.”

Praise for La bohème at the King’s Head Theatre is in plentiful supply – read my review!