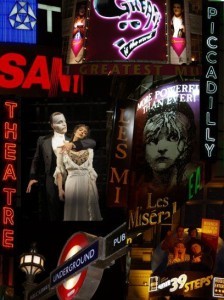 Every week it changes. This week (beginning 11  July 2011),  we see two grand old musicals – both celebrating 25 years – topping the charts of most popular London Theatre Breaks.

Les Miserables, helped by the addition to its cast of Alfie Boe and Matt Lucas this summer, has sped to the front faster than the dash for the bar at the interval of Man in the Iron Mask. We have seen more interest in that show alone than in several of the others put together.

It is nice to see my new favourite show performing so well. Billy Elliot isn’t as old as the others on the podium but certainly earns its place as far as pure theatricality and entertainment value is concerned – a brilliant show.

Newbie Shrek nips straight in at 5 just pipping Wicked to that place with most recent Londno theatre opening Ghost the musical next in 7th.

It used to be that new shows took a longer time to creep into the top ten for London Theatre Breaks, but a combination of special offers and the popularity of these particular films have do doubt helped their cause.

And as the only play in the top ten this week (Warhorse is at 12) I am glad to see Much Ado About Nothing – of course the Doctor Who factor is to thank for that statistical success!

Tips for next week? With the summer holidays coming up, expect to see a few more family shows like The Lion King (13) to enter the running, or maybe Mamma Mia! (11) – did you know that you can now see Mamma Mia! in Shanghai? Anyone for a theatre break in China?