Once more The Menier Chocolate Factory found another successful show to transfer to the West End – the last being Sherridan Smith in Funny Girl. This time it was the revival of Tom Stoppard’s Travesties which transferred to the Apollo Theatre at the beginning of February 2017. 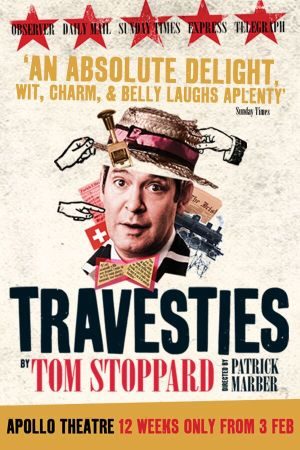 Tom Hollander, a familiar face on British tv screens with hits such as the award winning Rev and most recently in ITV’s Doctor Thorne (as well as featuring in two of the Pirate of the Carribean films alongside Johnny Depp), stars as day-dreaming Henry Carr, a minor British diplomat in Zurich in 1917.

In an attempt to remember famous faces of the time who have walked the streets of the Swiss city, Henry conjures up James Joyce, Tristan Tzara and Lenin. However, when Gwendolen and Cecily, characters from Oscar Wilde’s The Importance of Being Earnest, wander into his creative political scenario, Henry’s mind begins to wander too.

Freddie Fox, son of Edward, plays the part of Romanian avant-garde poet Tristan Tzara reuniting him with Hollander whom he appeared alongside in the film The Riot Club (2014).