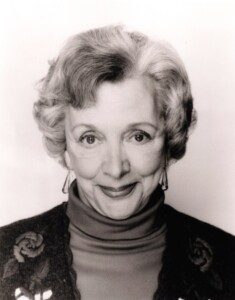 Thelma Ruby in her one woman show, That’s Entertainment, at the King’s Head Theatre Islington

With over 60 years spent on stage, treading the boards with the likes of Orson Welles, Dame Judi Dench, Topol and many more, this luminary entertainer is sure to surprise and delight audiences with an evening of songs, sketches, dance and dazzling entertainment.

‘Ruby’s comic timing is a delight – she lights the place up’ – Clive Davis, The Times

‘I was bowled over by her….her comic timing is second to none’ – Baz Bamigboye, Daily Mail

‘That’s Entertainment’ tells the story of her remarkable life in the spotlight, with tales to make you laugh, cry and hide behind your hands.

Thelma says ‘It’s delightful to be celebrating Valentine’s Day at the King’s Head Theatre. When they first asked me to perform my one-woman show last summer, little did I know I’d be playing to packed out houses and that they were going to ask me back! It’s turned out to be one of the loveliest jobs of my career.’

Superstar Thelma is returning to The King’s Head to recount her tales for one night only!