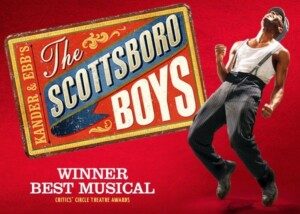 Following The Scottsboro Boys sold out run at London’s Young Vic Theatre, for which even we were not able to get tickets, the critically acclaimed musical transfered to the Garrick Theatre for a strictly limited season during the autumn of 2014

‘Out of this world‘ – The Observer

Theatre and hotel packages for The Scottsboro Boys are not available, but can offer some great saving on ticket only and theatre/dinner deals

Step right up and jump on board for this sensational musical which brings to life the extraordinary true story of nine young men, in a case that changed history forever.

Winner of the Critics’ Circle Best Musical Award 2013 and nominated for 6 Olivier Awards, including Best New Musical, this is also the final collaboration of legendary composing duo Kander and Ebb (Chicago, Cabaret) and is directed and choreographed by five-time Tony Award-winner Susan Stroman (The Producers).

The Scottsboro Boys – nearby hotels

The show will be opening at the Garrick Theatre on Charing Cross Road, so any hotels near Leicster Square, along the Strand or around Covent Garden will give you nothing more than a short walk between your hotel and the theatre.

If you are watching the pennies though you may want to look at hotels in Bloomsbury or South Kensington. You can get to them easily by hopping onto the Piccadilly Line at Leicester Square which is only 20 yards or so away from the theatre.

I find the Holiday Inn Kings Cross Bloomsbury offers a great option just out of Theatreland but on the way back to the station if you have come down to London by train and into St Pancras or Kings Cross. Otherwise the Russell Hotel is handy, just the opposite side of Russell Square to the British Museum.

If you just want a three star hotel though, the St Giles Hotel is not a far up Charing Cross Road and has excellent fitness facilities.