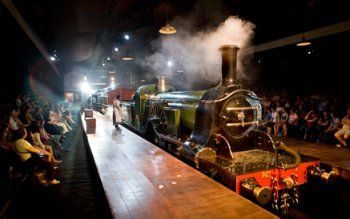 The Railway Children returned to London and Waterloo Station this summer.

The magical film starring Jenny Agutter and Bernard Cribbins has been made into a live show which features a real steam train (enter stage right!) and all the drama and the niaive intensity that we all remember from the film.

After a four star, record breaking run in 2010 E. Nesbit’s classic has returned to two platforms of the old Eurostar Terminal at Waterloo Station. This remarkable venue, built around the stracks, allows the production to boast London theatre’s most remarkable star, in the form of a 60 tonne steam-driven locomotive: Stirling Simple

Leading the cast as Station Master Perks is comedian and broadcaster Marcus Brigstocke (Just A Minute, QI and Have I Got News For You)

With performances through to 08 January 2012, don’t miss the chance to to enjoy a Railway Children theatre break and rediscover the story of how Bobby, Peter and Phyllis became The Railway Children.

Inside Waterloo Station
Please use the staircase located in the hoarding next to Platform 19 on the main station concourse.

For access customers, there is step-free access from the station at exits 1, 2 and 3. Once outside, please continue down Station Approach Road until you reach The Railway Children archway.