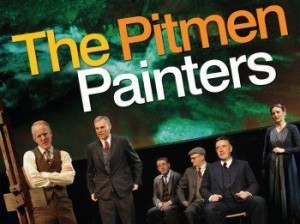 The Pitman Painters at the Duchess Theatre

The Pitmen Painters at the Duchess Theatre

Returning to London after two runs at the National Theatre on the Southbank, The Pitmen Painters came to the Duchess theatre. This award winning play is based on the book by William Feaver: The Pitmen Painters tells the true story of a group of pit workers who hire a professor to teach an art appreciation class.

The Pitmen Painters is an entertaining examination of the lives of a group of ordinary men who do extraordinary things as they rapidly abandon theory for practice.

Within a few years avant-garde artists became their friends and their work was acquired  by prestigious collectors, but every day the Ashington miners continued to work, as before, down the mine.

The Duchess Theatre is down by Aldwych with nearby hotels including the 3* Strand Palace Hotel, the 4* Kingsway Hall and the 5* Savoy. But Covent Garden Tube station is just 5 minutes walk away so you can easily get to the theatre from your hotel where-ever it is in central London.