F. Murray Abraham starred in Daniel Kehlmann’s The Mentor at the Vaudeville Theatre this summer. He played Benjamin Robin, a cantankerous old writer, whiskey aficionado and pedant, still basking in the reflected glory of long-ago succes who becomes a mentor for an up and coming literary star. 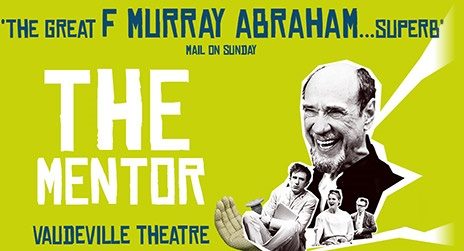 Martin Wegner is a rising young literary star, heralded as “The voice of his generation”.

When Martin is given the opportunity to develop his new play under the mentorship of his idol, the two writers meet and two massive egos are set on a collision course in this perceptive and compelling comedy about art and artists and the legacy of fame.

F. Murray Abraham won the Academy Award for Best Actor when he played Salieri in the film adaptation of Peter Shaffer‘s Amadeus (1983).

The Mentor ran at the Vaudeville Theatre, on London’s Strand,  from 24 June to 2 September 2017.