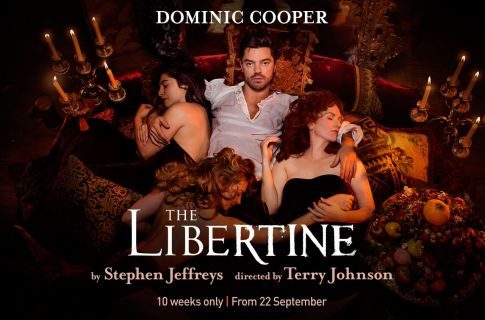 The Libertine Theatre Breaks are no longer available to book.
See what’s on next at the Theatre Royal Haymarket

Following a successful run at the Theatre Royal Bath The Libertine – depicting the hedonistic lifestyle of John Wilmot, second Earl of Rochester – transfers to the London stage in September 2016.

Terry Johnson directs Dominic Cooper, who was an original cast member of Alan Bennett’s The History Boys appearing in the stage play, 2006 film and the radio adaptation, in the West End revival of Stephen Jeffrey’s 17th Century romp about the Earl of Rochester who was notorious for his desire for overindulgence – especially when it came to women!

The true story of John Wilmot reveals him to possess emphatic charisma, poetic brilliance and great skill as a playwright, but he is ultimately defined by his appetite for excess. However, a chance meeting with actress Elizabeth Barry, played by CBS’ Elementary actress Olivia Lovibond, forces him to re-evaluate his beliefs and lifestyle, in turn, questioning all he thinks and feels.

The Libertine Theatre and Hotel Breaks

The Theatre Royal Haymarket is just south of Piccadilly Tube station, which is on the Piccadilly and Bakerloo lines, giving easy access to hotels in Bloomsbury, Kings Cross, Mayfair, Kensington, Knightsbridge Marylebone, Fitzrovia and the Southbank. If a walk is all you want then the Radisson blu Leicester Square (4 star) and Hampshire (5 star) hotels are closest and are of an excellent standard. Just across the other side of Piccadilly Circus, the Cavendish Hotel in Mayfair offers great 4 star accommodation at a much more affordable price (at the time of writing!) as does the 3 star St Giles hotel just a little further away on Oxford Street.