Adapted from the award winning novel, The Kite Runner Theatre Breaks returns to the West End

The critically acclaimed production of Khaled Hosseini’s best selling novel The Kite Runner  returned to London and to the Playhouse theatre for a limited run in the summer of 2017. 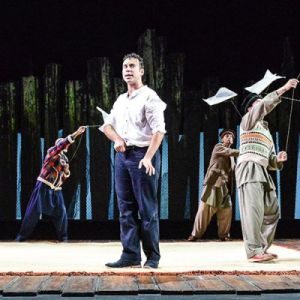 Here’s what the critics said about the stunning and mesmerising stage adaptation :

First published in 2003, The Kite Runner, was Khaled Hosseini’s first novel selling 31.5 million copies in 60 languages and it has now been adapted for the stage by Matthew Spangler.

About The Kite Runner

Based on his own expereinces of the tumultuous changes in policital power in his homeland of Afganistan, Hosseini’s moving story of The Kite Runner follows the friendship of two boys – Amir, who lives the life of priviledge and the son of his father’s servant, Hassan.

With the fall of Afghanistan’s monarchy and subsequent invasion of Soviet troops, there was a mass exodus of refugees to Pakistan and the United States, where Amir is fortunate to find himself growing up. However, for all those lucky enough to escape a country ravaged by war, there are ultimately many loved ones left behind  to fend for themselves against the imposing and brutal Taliban regime.

Filled with regrets for a country he can never forget, Amir returns to Afganistan as a young ‘Westernised’ man to confront his past mistakes and find redemption.

Hosseini said: “The Kite Runner is a story that appeals to very powerful, universal human emotions, it transcends its cultural setting, its geographic parameters, and speaks about universal human experiences – brotherhood, being a father, being a son, friendship, the desire to be a good person and be able to look at yourself in a mirror with a sense of self-respect.”

Actor Ben Turner, who is of British and Iranian descent will play the part of Amir. He said of the show: “There’s something almost Shakespearian about this story, the things it deals with are so big. It’s betrayal, revenge, redemption. We all make mistakes, we can all look back and think I shouldn’t have done that. This story embodies that. On stage, the story can’t help but suck an audience in. You can hear a pin drop and weeping in the audience. People are obviously deeply affected by it.”

Hotels close to the Playhouse theatre & The Kite Runner

At the top of Northumberland Ave along the Strand  is the four star Amba Hotel charing Cross  and a bit further on is the four star Strand Palace Hotel – one of Theatreland’s most favoured hotels. For five star decadence there’s also the world famous Savoy Hotel and the ultra trendy 5 star ME London hotel with its uniquely named rooms and its cool bars and restaurants.

If you don’t want to stay nearby you can catch the underground from  Embankment tube station which takes you West to Kensington or East to Tower Hill on the District & Circle lines . From the theatre you can easily walk across the Thames where hotels, on the south side of the river, are usually a bit cheaper. Take a moment to enjoy the beautiful views up and down the Thames as you cross it – especially breathtaking when it’s all lit up at night!